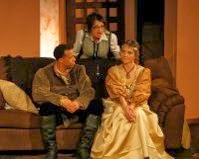 In this hilarious trip down Shakespeare Lane, Dr. Patricia Cataldo is a psychotherapist with a celebrity clientele of romantically involved couples from Shakespearean plays. Having directed Will’s plays for years in New York, I was curious to see the results if all his beleaguered heroes and heroines had only gone for therapy. There’s Desdemona trying to find support against her husband Othello’s jealous rages; there’s Hamlet’s existential problems (but are they all in his head?) that Ophelia mistakes for bi-polarism; there’s Kate and Petruchio hammering it out as their prelude to great sex, and there’s teenagers Romeo and Juliet, with raging hormones, trying to deal with hostile parents.

What they all have in common is a healthy lust for each other – except maybe Lady M whose lust is directed more toward her glee in murdering people than embracing her hen-pecked husband, Macbeth. More than just spoofing Shakespeare, here’s a wild send-up of psycho-analysis, since the psychotherapist herself, who’s not quite together, has the amazing knack of suggesting cures for their ills that quite frankly exacerbates problems. So don’t blame Shakespeare for how these tragedies turned out, blame ditzy Dr. Cataldo.

Posted by THEATRE SPOKEN HERE by Morna Murphy Martell at 11:11 AM