THE CHOSEN …in Hollywood 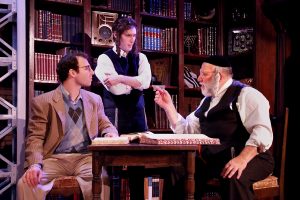 In the Williamsburg neighborhood in Brooklyn in the 1940s, two young Jewish males meet with hostility at a local baseball game. Due to an accident they become unlikely friends.

Their fathers, one Hasidic the other Orthodox, represent two opposing value systems. We witness the complicated relationship between parents and their children, and how fathers who care can both dominate and inspire their sons. 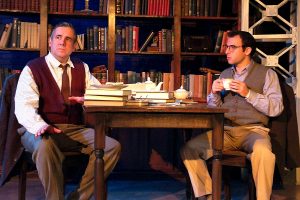 This deeply moving drama is based on the 1967 novel by Chaim Potok. It was adapted by Potok and Aaron Posner into a stage play that has had many reincarnations. This one, directed sensitively by Simon Levy, is as fresh and meaningful as today’s headlines.

The story begins in 1944 when the protagonists are fifteen years old. It’s set against historical events: the death of President Roosevelt, the end of World War II, the revelation of the Holocaust in Europe, and the struggle for the creation of the state of Israel. 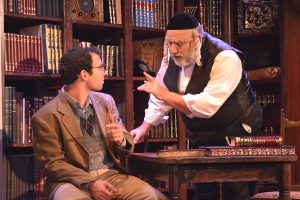 Sam Mandel, as Reuven, is so likeable you understand why the stern Rebbe (Alan Blumenfeld) accepts him into his home.  Dor Gvirtsman, as Danny, is touching as the emotionally guarded acolyte, while Jonathan Arkin, as activist/philosopher, brings clarity to the questions that haunt both young men.

DeAnne Millais’ set design, of two households with book-lined studies side-by-side, helped to emphasis the underlying contradictions that exist in their worlds. 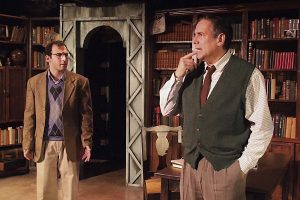 Also in the March issue of NOT BORN YESTERDAY.
Posted by THEATRE SPOKEN HERE by Morna Murphy Martell at 1:35 PM