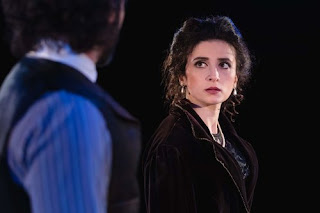 This adaptation of Tolstoy’s epic novel is staged in a stylized manner that cuts to the heart of Anna’s familiar story: the stifling marriage, the rapturous affair, the throwing caution to the wind and, of course, the ultimate tragedy.

However, British playwright Helen Edmundson spreads a wider canvas by showing two other women of the period in marriages both conventional and threatened. In fact, by focusing on three parallel stories the play becomes a modern appeal against female oppression. Yet Edmundson is careful to show how a man – in fact all of the men – can love the woman in their lives yet not see how callously they oppress them. 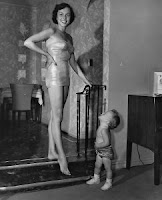 MISS AMERICA’S UGLY DAUGHTER  (Hollywood)
It is always fascinating to learn of the at-home behavior of a famous person and Barra Grant, daughter of Bess Myerson, does not disappoint. In this play we see the petty bad-mother side and the effect it has on a vulnerable child. There is poignant humor in the duel between them for attention after the parade has passed by. It’s an entertaining show but I wish Grant had told of her mothers good works as well as her selfish home behavior.

Bess Myerson did a lot of excellent public work that is missing from the show – it’s in the program but not on the stage. As the first Jewish Miss America, she was hit with the anti-Semitism that she fought against the rest of her public life. When I was NY Bureau Chief for the Hollywood Reporter I met Bess Myerson, then NY Commissioner of Cultural Affairs. More than a beauty queen, or TV personality, she was a public figure doing significant work.

AMERICA ADJACENT (Los Feliz)
In this timely play, six pregnant women from the Philippines, living together in a one-bedroom, one-bath unit in East Hollywood, do their best to overcome fears of jail and deportation. Playwright Boni B. Alvarez examines the promise of US citizenship, saying “As the child of Filipino immigrants, I have always been fascinated by the American Dream. How far would you go to give your child a better future?” Directed by Jon Lawrence Rivera and produced by Gary Grossman and Tony Abatemarco for Skylight Company. At Skylight Theatre, 1816 N. Vermont, Los Feliz. Tickets & Parking info: (213) 761-7061 or www.SkylightTix.org.


TUESDAYS WITH MORRIE  (Sierra Madre)
Journalist Mitch Alborn saw his beloved college professor, Morrie Schwartz, on ABC-TV Nightline being interviewed about the challenge of living with Lou Gehrig’s disease. Mitch starts to visit Morrie every Tuesday and learns from him how to live life fully in the face of loss. The play debuted off-Broadway in 2002 and New York magazine said: "Unforgettable! No matter how well you tell the story, the play makes it more vivid, more shattering, more humorous." Larry Eisenberg is Morrie, Jackson Kendall is Mitch. At Sierra Madre Playhouse, 87 W Sierra Madre Blvd. Tickets: (626) 355-4318 or www.sierramadreplayhouse.org Free parking.