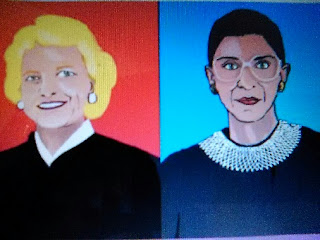 SISTERS IN LAW (Beverly Hills)
Tovah Feldshuh portrays Democrat Ruth Bader Ginsburg and Stephanie Faracy is Republican Sandra Day O’Connor in this play that celebrates the friendship – and conflict – between two modern day legends. As the US Supreme Court’s first female justices, they are confronted by a case that, by pitting them against one another, lays bare their most deeply held personal and political beliefs. Based on the book by Linda Hirshman, and written by Jonathan Shapiro, director Patricia McGregor has an all-female design team. At the Wallis Center, 9390 Santa Monica Blvd. Tkts: (310) 746-4000 or www.TheWallis.org/Sisters.
THE JOY LUCK CLUB (Sierra Madre)
In San Francisco, four elderly Chinese women meet regularly at this club to play Mah Jong but, when one passes away, they invite her American-born daughter to join the group. Soon all of them struggle across a seemingly unpassable chasm of culture, generation and expectations to find common ground. Based on the novel by Amy Tan and adapted for the stage by Susan Kim. Director is Tim Dang, Artistic Director Emeritus of East West Players. At Sierra Madre Playhouse, 87 W. Sierra Madre Blvd. Tkts: (626) 355-4318 or www.sierramadreplayhouse.org. Free parking.
DRIVING WILDE (Hollywood)
In this surreal adaptation of Oscar Wilde’s The Picture of Dorian Gray, playwright Jacqueline Wright transforms the gothic horror story into a contemporary meditation on the pursuit of beauty. Here the beautiful young Dorian awakens from a coma, unaware of his past, and seeks the perfection of nature in a corrupting aging world. In this existential view can beauty be kept or will it fade into death? Directed by the always imaginative Bart DeLorenzo, Founding Artistic Director of Evidence Room Theatre. At Theatre of Note, 1517 N. Cahuenga, Hollywood. Tkts: 323-856-8611, or visit www.theatreofnote.com.
ANDY WARHOL’S TOMATO (Venice) 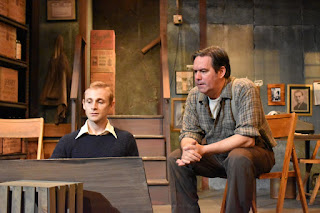 Pittsburgh folklore has it that there is a working-class bar where a teenage Andy Warhol drew on napkins in exchange for Coca-Cola drinks, and he also splashed a bold painting on one wall. Playwright Vince Melocchi states: “While drinking in that same bar, I began to see it… as an exciting, mysterious place.” In his intriguing and thought-provoking play, Melocchi explores the mystery that is art through the interactions between a budding eccentric genius and a hard-working, seemingly unimaginative, bar owner. Derek Chariton is brilliant as Warhol, a sly child with the wisdom of a sage. Keith Stevenson is deeply moving as a man whose dreams have been crushed by harsh reality. The play reveals the effect that their brief friendship has on each of them. Directed with sensitivity by Dana Jackson. At Pacific Resident Theatre, 703 Venice Blvd. Venice. TKTS: (310) 822-8392 or www.pacificresidenttheatre.com. 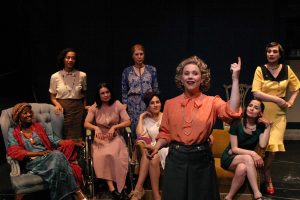 FEFU & HER FRIENDS (West Los Angeles)
Playwright Maria Irene Fornés is hailed as “the early feminist giant of the avant-garde” and this 1977 drama, still relevant today, shows her at her most fascinating and provocative. Fefu is the eccentric hostess when seven of her friends arrive for a women’s do-gooder event. At first what seems to be a drawing-room comedy, soon darkens into an exploration of the tremors that beset women regarding their relationships with male dominance and female powerlessness. All the actresses superbly embrace the quixotic demands of the script. Outstanding are Tiffany Cole as the dynamic Fefu; Sandy Duarte as emotionally damaged Julia; Cynthia Yelle as social outcast Paula, and Sydney A, Mason as vivacious yet troubled Emma (and eloquent saxophone player). Directed with passion by Denise Blasor and produced by Ron Sossi in association with Gloria Levy. At Odyssey Theatre, 2055 S. Sepulveda Blvd. West LA. Tkts: (310) 477-2055 ext. 2 or www.OdysseyTheatre.com.

Posted by THEATRE SPOKEN HERE by Morna Murphy Martell at 9:32 AM