A DEATH-DEFYING ESCAPE - in Hollywood - REVIEW 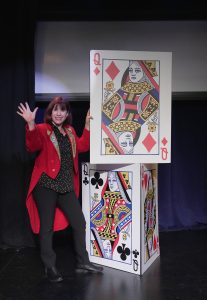 Fact: Discovering at age 10 that the messes in her life were great fodder for comedy, Judy Carter overcame a speech impediment and began doing magic shows for birthday parties — leading to a full-page story in the Los Angeles Times. She was the first woman to perform at the Magic Castle Close-Up Gallery in Hollywood — where she was literally picked up and thrown out because “Cards are for men.” Undaunted, she continued developing her own style of magic, creating a death-defying escape from her grandmother’s girdle and sawing a man in half. At one engagement, when the airlines lost her luggage, she went on without her tricks — and instantly became a standup comic. Since then, she has appeared on over 100 TV shows and four comedy cable specials, as well as opening for Prince and playing Vegas.

Review: Well, about halfway through this delightful show Judy mentioned that she is the author of some books. Click! I suddenly realized I have long admired her for her book "The Message of You." About five years ago, I was a member of comedienne Rebecca O'Brien's Standup Comedy Workshop and the tome that was the focus for the year I attended was Judy Carter's advisory in that book. Tell about your own life, inspire people to live and love and laugh, while sharing what might even be considered a sad or tragic life story. So, how to remain a disinterested theater critic when she was an important influence on my own creative life? 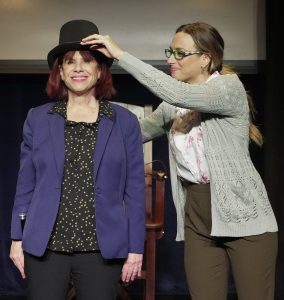 In this terrific show, directed by Lee Costello, having conquered the comedy world, and had strong impact as an author, Judy now brings her magic to live theater. We can see that taking chances was her path to success as she reaches back to a turbulent childhood where doing magic tricks entertained her friends and pleased her hypercritical parents. There was a tragedy in her early life that colored her young days and helped determine her future drive to succeed, a revelation that brought tears to my eyes. However, the show itself remedied this pain with its humor and wonder. 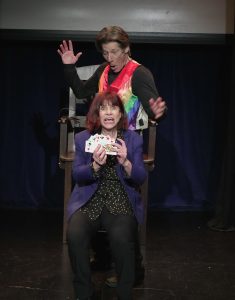