BLUEPRINT FOR PARADISE …in Hollywood 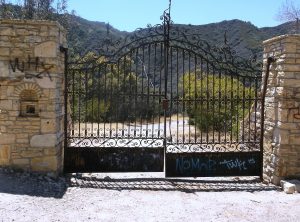 This highly dramatic play, by Laurel M. Wetzork, takes us into the minds of those who believed it possible that Hitler would win the war. Based on fact, it takes place in 1941 when America was roiled by conflict between those demanding the US enter the war and those determined to stay out of it.

A wealthy heiress and her pro-fascist husband, living in Hancock Park luxury, are building a Utopian complex on 50 acres in the Pacific Palisades. This will be a residence for victorious Nazi officials, even a West Coast home for the Führer himself. As the building plans are in disarray, they call in the top Architect in Los Angeles to take over. When he turns out to be an African American with a sharp eye for hypocrisy the racist plans also fall apart. 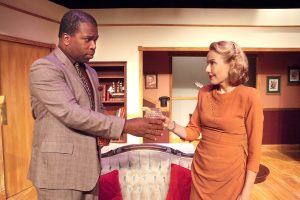 It’s a tour-de-force for Meredith Thomas, as the heiress, who gains our sympathy because it’s clear that propaganda has her believing Nazism has a benign intent; David Jahn is chilling as her scheming husband who sees himself glorified when the Nazi’s win; Regi Davis as the master builder smoothly negotiates the fine line between modesty and cynicism; Peter McGlynn is affably sinister as the German spymaster; Steve Marvel is loutish as a homegrown fascist; Ann Hu is forbearing as the racially-insulted maid from China, and Alex Best is enigmatic as a servant on a mission. 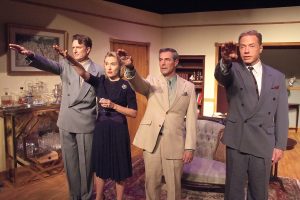 Directed by Laura Steinroeder for full theatrical effect. Produced by Debbie Bolsky of Athena Cats, in association with Racquel Lehrman and Victoria Watson of the ubiquitous Theatre Planners.