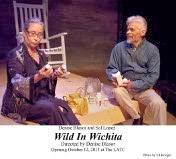 This is a sweet play about two people in their 70’s, in a Kansas convalescent home, who fall in love. He is Mexican, she is Puerto Rican, a fact that initially divides them but, stranded as they are in the bleak landscape of Kansas, actually draws them together. Both have serious health problems, she also has emotional scars, but they daringly try to escape their infirmities by acting as wild adventurous teenagers.

They go skinny dipping, plan to elope to Vegas, meanwhile driving their adult children into worried rages. It blissfully works for awhile, life is full of promise, until reality arrives to knock sense into them and cool their ardor. The play asks the age old question, “can love conquer all?” and in this case I believe it can. 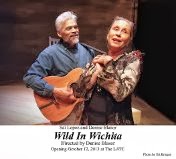 Sal Lopez, as the romantic Joaquin, steals the show with his zest for life, his beautiful melodic singing and expert guitar playing. Anyone could love such a man, and happily the morose Carmela, played by Denise Blasor (who also directs) soon does. 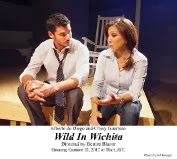 As Carmela’s worried son, Alberto de Diego, is an energy source in himself; and Crissy Guerrero, as Joaquin’s bossy daughter, goes from bullying to understanding as the play unfolds.

Produced by The Latino Theater Company, and written by native Texan, Lina Gallegos, a Spanish version played nearly two years in NYC. As director, Blasor subtly brings the cast to full human potential and the sun-bleached patio set by Carolina Ortiz, well lit by John A. Garofalo, captures the dry bleakness of Kansas.

Reviewed in the November issue of NOT BORN YESTERDAY, available in Public Libraries and Senior Centers throughout the Los Angeles area.
Posted by THEATRE SPOKEN HERE by Morna Murphy Martell at 12:27 PM