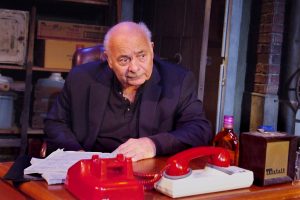 If you’re looking for verisimilitude you can be assured that is exactly what you get every second that Burt Young is onstage and he’s there almost the entire show. He plays an aging mobster now working out of a shabby back room in a Chinese take-out and the years of being in charge permeate his very being. However, he’s now an old man, his wife is ill, he needs a last vig (the take from a gambler charged by a bookie) that will give him a chance at retirement in Florida. But, as we know from films about mobsters, things rarely go according to plan and when the scheme implodes we feel the anguish and bitter regret of a man who has lost his power.

Even though it’s often difficult to hear his words, you can’t take your eyes off Burt Young, his facial expressions and body movements tell all. This mobster is at the mercy of his followers and Young’s Big Joe can barely hide his impotent rage. The rest of the cast are superb: Ben Adams as his assistant; Gareth Williams as his old money-running pal; Paul Li as the overworked chef and, especially, Bruce Nozick as a corrupt detective.

Well written and directed by David Varriale. The grungy storage room setting by Joel Daavid is lit by Kelley Finn, with sound by Will Mahood. Costumes by Mylette Nora. Imaginatively produced by the ubiquitous Racquel Lehrman of Theatre Planners.

Also reviewed in the February issue of not born yesterday.
Posted by THEATRE SPOKEN HERE by Morna Murphy Martell at 1:06 PM No comments:

THE MANOR …in Beverly Hills 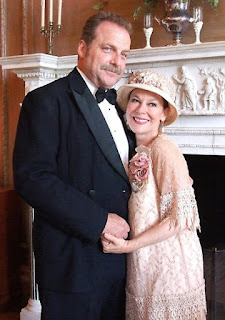 This site-specific drama, performing once a year at Greystone Mansion, is now in its 15th season and not to be missed. Haunting the halls of this classic Beverly Hills mansion is a murder mystery and the brilliant script by Kathrine Bates is based on actual incidents that took place in the very rooms and halls where we are witnesses. It starts out in the halcyon days of the roaring twenties when the MacAlister (Doheny) family are celebrating the wedding of their son and heir to the girl of his dreams.

However, all is not as it seems. As we move through the glorious building in separate groups, we enter private rooms and witness dramas that do not bode well for the future. There is intrigue afoot: a corrupt Senator is calling in a dubious favor from his rich old friend; the caretaker’s brooding son is in love with the eager bride, and a foreign housemaid ominously predicts tragedies to come.

Ten years later it all comes to a shocking climax in the very rooms we tiptoed through, as some people fall apart, others rally themselves, and still others die. Go see for yourself - and enjoy the journey with a brilliant cast, glorious setting and fabulous costumes.