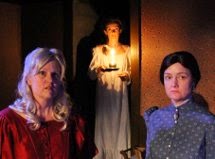 Canadian playwright Sharon Pollock cleverly creates a play within a play to explore the motivations and actions of the notorious Massachusetts 1892 axe murderess Lizzie Borden. 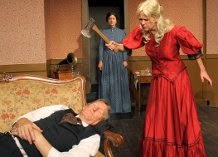 As a true crime aficionado, I have no doubt that she killed her hated stepmother with 19 blows then, barely an hour later, her father with 11 blows. Still, by using this oblique device, Pollock walks us through the day’s events with a plausible explanation, both emotionally and psychologically, for what motivated Lizzie. Apparently it came down to money, as with many other famous crimes, but in this intriguing play the personal dynamic of the family is laid bare and we see the deeper forces at work. 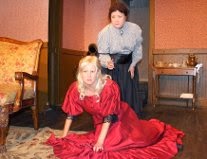 The actors superbly reveal the crazed dynamic of a family seething with unspoken contempt but it is Lizzie, crazy Lizzie, a bad seed in a polluted garden, who acts out the undercurrents. It is well known that she despised her stepmother but, in this telling, the revelation of her true feelings for her father brings a sad but plausible end to the story. 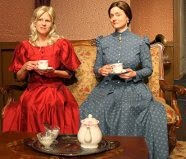 The excellent cast are: Carolyn Crotty as an enigmatic Lizzie and also the Irish maid; Meg Wallace as an actress brilliantly “performing” Lizzie; Hap Lawrence as the beleaguered father; Deborah Cresswell as the devious stepmother; Amy Moorman as the timid older sister; Steve Peterson as the greedy brother-in-law; Jay Disney as a flirtatious local doctor, and Steve Jarrard as Lizzie’s adroit defense attorney.

Subtly directed by Jarrard, who also designed the simple set, with lighting by Jason Ryan Lovett, and lovely costumes by Meg Wallace. Photos by Mani Horn.

Produced by Collaborative Artists Ensemble. At Raven Playhouse, 5233 Lankershim Blvd. NoHo, through June 15. Tickets at 323-860-6569 or www.plays411.com/bloodrelations.
Posted by THEATRE SPOKEN HERE by Morna Murphy Martell at 10:47 AM