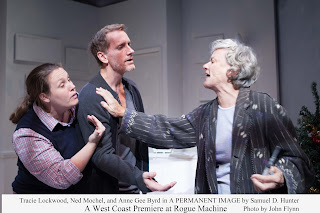 This award-winning play, by Samuel D. Hunter, belongs in a new genre that is becoming sickeningly common – the family that battle each other to the death. Forget psychology, it’s war, and just wait for the down-on-the-floor battle that is sure to come. In this case, Dad has committed suicide in order to become part of the cosmos (I kid you not) and Mom, who appears to be a smart, no-nonsense woman, has demonstrated inner turmoil by painting the entire house white, pictures and all. Now she has invited the kids home to help her follow Dad into the stratosphere.

Yes, that’s the plot and it makes no sense unless you are of the opinion that people who live in the Midwest - here it’s Idaho – are really a loopy lot. The parents are questionable enough, but when the lesbian daughter gets really nasty with her aloof photographer brother, it’s a physical wrestling match. (Shades of Osage County).

Pity the poor actors who all deserve better material, even Mark L. Taylor, as Dad, who only appears as a hologram. Anne Gee Byrd’s witty and practical Mom is hardly a woman ready to off herself; as elder son Bo, Ned Mochel demonstrates inner conflict mainly by outer exasperation; while Tracie Lockwood’s Ally is so belligerent there are no surprises in her final sad confession. When the play ended with Mom taking the potion, the audience burst into applause. Have we really sunk so low that a pointless suicide merits applause?