From over 100 submissions, GLO chose these five excellent plays, all written and directed by local theater women. Not to play favorites, here they are in the order performed. 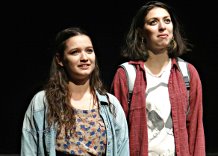 THE PLAN by Katherine James. Two young gals, former best friends, face up to their reason for their split when each of them gave up their shared dream to pacify family demands. Zoë Lillian and Kyra Morling. Directed by Branda Lock. 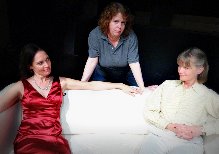 ALL ABOUT HAROLD by Diane Grant. Three women share happy memories of the romantic peripatetic Harold who managed to be their dream-man before slipping away to other shores. Amy Stoch, Varda Appleton and hilarious Michelle Simek. Directed by Laura Steinroeder. 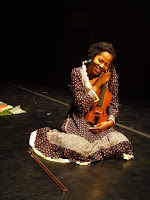 FIDDLIN’ ON THE MOUNTAINTOP by Robin Byrd. A poignant solo performance of a young country girl who, all alone, faces the loss of her beloved parent and survives through a love of music. Bravura performance by Shanel N. Moore. Directed by Julianne Homokay. 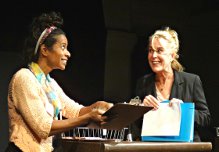 VITAL RECORDS by Alex Dilks Pandola. It’s a Kafkaesque comedy of trying to get service at some Legal Records Bureau where the attendants weirdly resemble each other while their attitudes are all to familiarly officious. Kate Torri with Gayla Johnson who is sublime in three gleeful roles. Directed by Miranda Stewart. 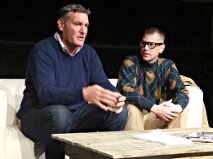 GENTLEMEN’S PACT by Karen Howes. How does a husband react when a family friend shows up wanting to marry his wife? In this comedy he gives it serious thought, until the wife shows up and gives her heated opinion. Eric Toms, Joni Allen and masterful Daniel Riordan. Directed by Michelle Joyner.