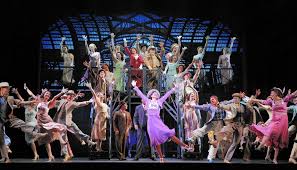 Come and meet those dancing feet! They will amaze and delight you in this rip roaring revival of the 1980’s Broadway musical, based on the classic 1933 movie. You know the story: starry-eyed young singer-dancer comes to Broadway hoping for a big break, the leading lady is out of commission, the girl goes on in her place, and a theater legend is born. “You’re going out there a nobody, but you’re coming back a star!” the director booms, and 83 years later it still gives you goose bumps. 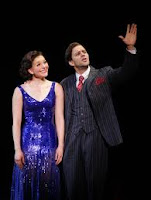 You’ll want to sing along to such hits as “We’re In The Money,” “Lullaby of Broadway,” “Shuffle Off To Buffalo,” “I Only Have Eyes For You” and of course “42nd Street.” The music is by Harry Warren, lyrics by Al Dubin. Originally directed and choreographed by Gower Champion, it was an instant hit and ran on Broadway for over 8 years. 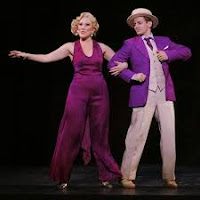 Plaudits to director Mark Bramble (original co-author with Michael Stewart) and choreographer Randy Skinner; to Roger Kirk for mind-blowing costumes, and to the dancers, who appear and disappear, then after only seconds off stage, reappear in new costumes tap tapping gloriously.

A Troika Entertainment LLC production. At the Hollywood Pantages Theatre, 6233 Hollywood Blvd (near Vine)  Through June 19.
Tickets: (800) 982-2787 or www.HollywoodPantages.com/42nd Street.