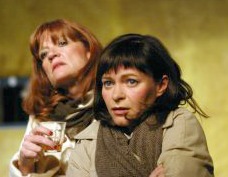 As a young actress in the 1960’s, my first Broadway show was as understudy to Joan Plowright as a 17-year old in A TASTE OF HONEY. Since then, this is the first and only version I’ve dared to go to and, happily, seeing the play from a new viewpoint was a moving experience. 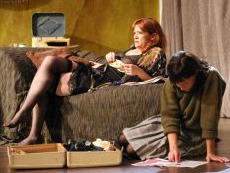 The story of a young English gal from the poverty stricken Midlands, with a neglectful floozy mother, a black sailor boyfriend, and a gay male roommate, still holds up. Shelagh Delaney was famously only 18 when she wrote this poignant and meaningful play. The honesty of the story and the believability and likeableness of all the characters makes it as true today as when she wrote it. 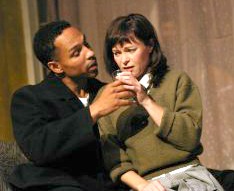 In this new production, director Kim Rubinstein brings the scenario to natural life through a superbly individualistic cast. Kestrel Leah is ascendant as the poignant if impudent Jo; Sarah Underwood Saviano is delightfully trashy as her wayward mother (and also a marvelous saxophone player); Leland Montgomery is Jo’s plaintive but fiercely loyal pal Geoffrey; Gerard Joseph is sweet and sensuous as her sailor lover, and Eric Hunicutt is amusing as the mother’s smooth-talking boozer boyfriend. 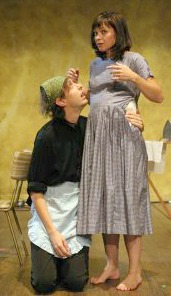 As in the original production, there are onstage musicians, Armando Wood, Mark Guiterrez and actor Joseph, to add comment to the action. The adaptable set of a shabby bed-sit by Nephelie Andonyadis, is lit by Katelan Braymer, with costumes by Denise Blasor. Music and sound design is by actress Salviano and Carlos Torres. Produced by Beth Hogan for Odyssey Theatre Ensemble.

Also reviewed in the November issue of NOT BORN YESTERDAY.