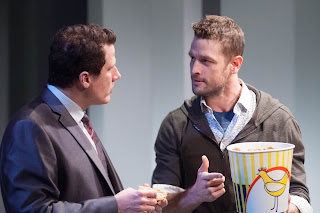 This intriguing play by Alexander Dinelaris, Oscar-winning co-writer on the 2014 film ‘Birdman,’ shines a light on choices we think we make, but actually make us. In this earlier play, produced in NYC in 2009, he had already probed the question of defeat versus creativity. It’s a haunting subject yet, in this play’s moving finale, we see that the ultimate challenge to death itself is in living life fully. 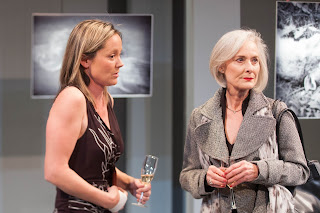 At the opening a successful woman photographer (Laurie Okin), whose work is hailed worldwide, delivers a bitter speech to aspiring college students about loss and disillusion. At the same time a brilliant young trend analyst (Lea Coco), hired by a crude advertising mogul (Jonathan Bray), suggests a message of hope and family bliss as a means to sell fried chicken. These disparate views of life intertwine and implode when photographer and analyst meet and fall in love. In contrast to their finding meaning and joy in each other, the mogul falls victim to his own cynicism and insatiable lust for sexual one-upmanship. 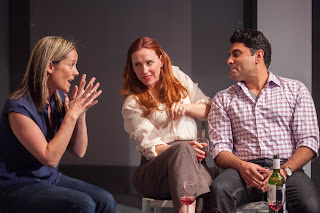 The memorable cast also includes Susan Wilder as her college mentor; Nardeep Khurmi as his doctor-friend; Tania Verafield as her aspiring protégée; Frank Collison as her disillusioned father; plus Alexandra Hellquist and Jennifer Sorenson both excellent in multiple roles.

Under Michael Peretzian’s superb direction we are drawn into their lives yet still kept at an observant distance.

Produced by John Perrin Flynn and David A. Mauer for Rogue Machine.

Also reviewed in the April issue of NOT BORN YESTERDAY.
Posted by THEATRE SPOKEN HERE by Morna Murphy Martell at 2:29 PM