BUILDING THE WALL …in Hollywood 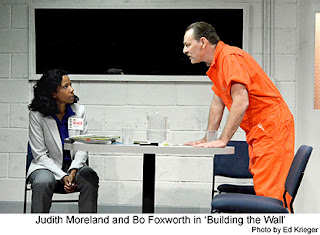 According to playwright Robert Schenkkan, in spite of our Constitutional protections it can happen here! A professor of history, writing about a terrible crime, interviews a man on death row who sees himself as merely a cog in a wheel of political command.

What if 11 million undocumented aliens were ordered to be deported but their countries of origin refused to take them? It seems like this is already a possibility and, in this frightening play, we learn about the consequences of such action. Who is responsible? The politicians that made the edict, or the menials who have to carry it out?

Through highly dramatic dialogue we are carried along on the journey from political rhetoric to deliberate action to eventual murderous expediency. It resonates with Hannah Arendt’s theory on The Banality of Evil and seethes with moral indignation at the present attempt to cleanse the USA of undesirables in the name of national authenticity.

Under Michael Michetti’s fluent direction, the two actors, Judith Moreland and Bo Foxworth, duel with passionate intensity over the difference between responsibility and blame. Many people in the arts are using their creative tools to protest injustice and here, with productions of this play scheduled across the country, the alarm is raised. Hopefully such a tragedy could not happen here even though, in this play, it makes perfect logical sense.

At The Fountain Theatre, 5060 Fountain Ave (at Normandie), Hollywood. Tickets: (323) 663-1525 or www.FountainTheatre.com. Extended to August 27 with Victoria Platt as Gloria. On-site parking $5.
Posted by THEATRE SPOKEN HERE by Morna Murphy Martell at 10:55 AM