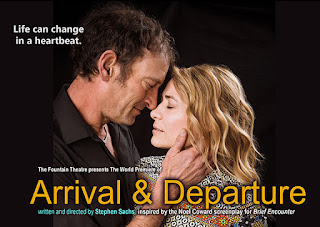 We are in the New York City subway in this modern-day version of Noel Coward’s classic Brief Encounter and again here are two people, meant for each other, who can never realize the happiness it promises. Stephen Sachs has written and directed this extraordinarily moving play with a new approach: the eloquent man is Deaf and the troubled woman hard-of-hearing as are the two actors. Their communications are all by signing and yet we hear their voices through other actors and their words by writing on the walls. By framing this against vivid fast-moving film of NYC crowds and scenes, Sachs draws us into that dynamic high-energy milieu. 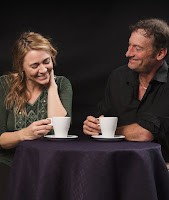 Heading the superb cast are Troy Kotsur and Deanne Bray, and there is an intensity to their performances that transcends imaginary characters. Bray’s Emily especially tears at our hearts. Married to a good but insensitive man, with a rebellious teenage daughter, her need for tenderness is palpable. Kotsur’s Sam is a teacher at a school for the Deaf, who gives support wherever he finds need while asking for little in return. When he forms a bond with Emily he opens himself to longings and emotions he has held in check for years. Their final parting although anticipated (we all know the original story) has an impact that resonates deeply. The ever haunting – if only…

Adding to the intensity of the play are parallel stories, with Jessica Jade Andres and Shon Fuller (Waitress vs. Subway Cop) teasing and battling in their longing to connect honestly. Aurelia Myers’ troubled teenager searches desperately for love on social media. Brian Robert Burns is touching as Emily’s sincere but mystified husband, while Adam Burch and Stasha Surdyke are splendid in multiple roles.

At The Fountain Theatre, 5060 Fountain Ave (at Normandie) in Hollywood.

Also reviewed in the September issue of NOT BORN YESTERDAY

Posted by THEATRE SPOKEN HERE by Morna Murphy Martell at 11:03 AM