THE CHRISTOPHER BOY’S COMMUNION (West Los Angeles)
This new play, written and directed by David Mamet, is being staged for a very limited run and features an all-star cast that includes William H. Macy and Rebecca Pidgeon (I saw them both in his original production of “Oleanna” in NYC), Clark Gregg (founding member Atlantic Theatre Co) and Fionnula Flanagan (EMMY winner, two TONY nominations) and others. The story involves a grisly murder that has taken place in Central Park and, knowing and admiring Mamet’s work, this promises to be a volatile and meaningful drama. It’s a guest production at the Odyssey Theatre, 2055 S. Sepulveda, Los Angeles. There will only be 10 performances from Feb. 13-23. For reservations call (310) 477-2055 or online at
https://web.ovationtix.com/trs/pr/10240066 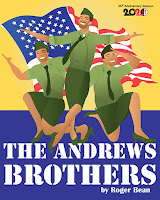 THE ANDREWS BROTHERS (Long Beach)
In this madcap salute to the swinging ‘40’s, written and created by Roger Bean whose “Marvelous Wondrettes” is still roaring across the land, a USO show is threatened with cancellation when a certain trio of singing sisters (clue: last name Andrews!) fail to show up. When three earnest and determined stagehands, who believe that “The Show Must Go On!” perform the act with some cross-dressing and a lot of chutzpah - it sure does. Featuring over 25 songs made famous by the Andrew Sisters, including “Boogie Woogie Bugle Boy,” “Slow Boat To China,” “Don’t Sit Under The Apple Tree” and “Accent-chu-ate the Positive” it’s a valentine to the heroes of World War ll. Directed and choreographed by Jamie Torcellini, with a rambunctious live band led by music director Brent Crayon. At International City Theatre in the Long Beach Performing Arts Center, 330 East Seaside Way, Long Beach. Tkts: 562-436-4610 or www.InternationalCityTheatre.org
NOWHERE ON THE BORDER (North Hollywood)
In this timely play, set in the hostile wasteland between nations, a Border Watch volunteer confronts a Mexican man who claims to be looking for his missing daughter. Playwright Carlos Lacámara, who was two years old when his family left Cuba, made a visit there in 2000 and was moved by the hardships of life on that island. Here he reveals the personal dramas that drive people to cross borders, both physical and emotional. Directed by Stewart J. Zully for Road Theatre Company. At The Road on Magnolia, 10747 Magnolia Blvd. NOHO. Tkts: 818-761-8838 or www.roadtheatre.org
WEST ADAMS (Los Feliz)
Back in the 1980’s my husband and I bought a beautiful Victorian house in West Adams and became friends with the neighbors as well as other lovers of classic homes there. This new play, by Penelope Lowder, is listed as a dark comedy about race and class. I’d better get to see it since the promo notes state that: “Perhaps reshaping a newly adopted neighborhood in your own image isn’t as lofty as one might think!” Directed by Michael A. Sheppard. At Skylight Theatre, 1816½ N Vermont, Los Feliz. Tkts: 213-761-7061 or http://SkylightTix.com
THE BLUEST EYE (Hollywood)
Lydia Diamond adapted this play from the novel by Pulitzer and Nobel Prize-winning author Toni Morrison. It’s a portrait of a black girl’s coming of age in the racially turbulent 1940’s and explores the toll taken on a community, a family and an innocent girl. As Morrison stated, “I do not want to dehumanize the people who wound this girl, because that would simply repeat their mistake.” Directed by Bernadette Speakes with choreography by Shari Rhone. At The Hudson Theatre, 6539 Santa Monica Blvd. Hollywood. Tkts: 323-856-4249 or 323-960-1055 or www.Plays411.com