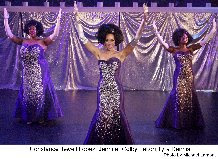 If you are among the few people who have never seen the stage or screen “Dreamgirls,” here is a top-level revival with a dynamic cast of 28 and a vibrant six-member band.
The late Michael Bennett, and playwright Tom Eyen, clearly drew the inspiration for this show from the 1960’s Motown phenomenon that forever changed the sound of popular music.  It’s the story of three girls from Detroit – oops, Chicago - trying to make it in show biz and the Machiavellian impresario who makes them succeed beyond their wildest expectations.
In this show, the Berry Gordy character comes off as devious and callous.  He manipulates the women in his “stable” by using sex/love as a come-on to make them his stars.  Apparently, Bennett was sued for misrepresenting the true story but, since this is not a history lesson, and it all happened over 40 years ago, my advice is to just sit back and enjoy the show.
The entire cast is superb and Constance Jewell Lopez, in the star-making role of Effie, doesn’t disappoint.  She delivers her biggest and best number, “I’m Not Going,” with such anguished power one is reminded of “Rose’s Turn” in “Gypsy” for the impact it has on the audience.  Another favorite was Keith Arthur Bolden, as Jimmy “Thunder” Early, who stops the show with his antics and stole nearly every scene he was in.
Also noteworthy among the excellent cast were Welton Thomas Pitchford as the cold-hearted Curtis; Jennifer Colby Talton as the gentle Deena; Tyra Dennis as Dreamgirl Lorrell; Lorenzo T. Hughes as an honest business manager;  Frank Andrus Jr. as songwriter CC White, and Tiffany Williams as the 3rd Dreamgirl.  Paul Lange was a delight in his tiny role as a Pat Boone clone.
Somehow, director Marco Gomez has managed to pull back the solid MET walls to persuade us that we are in a Broadway-size theatre, and producers Michael Abramson and Dolf Ramos have not stinted on production values.  The myriad costumes by Michael Mullen are dazzling; the hair and wigs by Aja Morris-Smiley are right on target; the choreography by Rae Toledo makes you want to dance along; and the live band, led by musical director Chris Raymond on keyboard, has you bouncing in your seat.
A DOMA Theatre production, “Dreamgirls” is playing at The MET Theatre, 1089 N. Oxford Ave in Hollywood through May 5.  Tickets at: (323) 802-4990 or  www.domatheatre.com.
Review by Morna Murphy Martell, former Broadway critic for The Hollywood Reporter.
Posted by THEATRE SPOKEN HERE by Morna Murphy Martell at 11:05 AM