THE SCOTTSBORO BOYS… at the Ahmanson Theatre 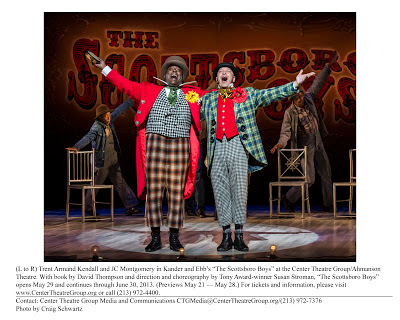 “The Scottsboro Boys” had its world premiere at the Vineyard Theatre in New York in February 2010 then moved to Broadway in October where it received 12 Tony Award nominations including Best Musical. The moving score is by John Kander (composer) and Fred Ebb (lyricist), both known for “Cabaret” and the NYC anthem “New York, New York.” Sadly, Ebb died in 2004 and never got to see this magnificent show, their last collaboration.

Told as a Minstrel Show, with black actors playing white sheriffs, judges, etc. and two young black men audaciously playing the white girls, it’s funny as well as poignant. This is not only a dynamic musical, it’s also an important history lesson told with imagination and daring. 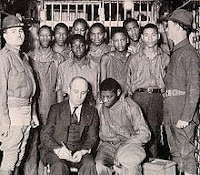 We have heard about the nine young black men in Alabama in 1931, sent to prison when two transient white girls said they raped them, and how they were railroaded by Southern bigotry, and the terrible injustice done to them. Now we know even more because, in this brilliant show, each of them stands out as a separate individual. To tell this story in a musical took courage, and to tell it as a mock Minstrel Show is probably the only way we could look on and not weep. 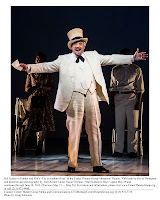 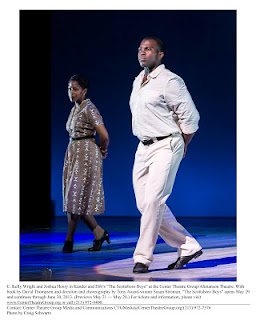 Dominating the cast is Joshua Henry as a man whose dignity sentences him to the harshest treatment. The only white is Hal Linden, looking like the KFC Colonel and spouting homilies about justice under the shadow of the electric chair.

Effective in multiple roles, and hilarious in many, are Trent Armand Kendall and JC Montgomery (see above). Plaudits to Gilbert L. Bailey II and Christian Dante White as boys and girls, and to Justin Prescott, Clinton Roane and Deandre Sevon as bewildered teens. Cedric Sanders, David Bazemore and Christopher James Culberson are all noteworthy, as is C. Kelly Wright as a mystery woman whose identity is a final revelation. 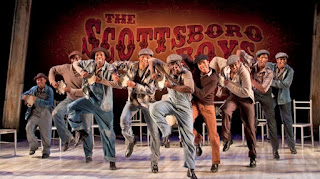