WE ARE PROUD TO PRESENT A PRESENTATION ABOUT THE HERERO OF NAMIBIA, FORMERLY KNOWN AS SOUTH WEST AFRICA, FROM THE GERMAN SUDWESTAFRIKA BETWEEN THE YEARS 1884-1915… in Hollywood 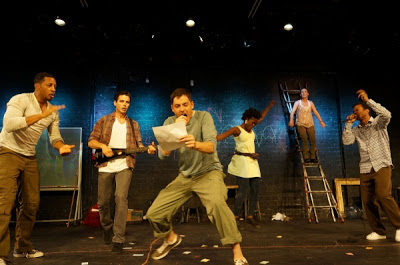 A group of actors are attempting to dramatize the first genocide of the 20th century, where German troops systematically wiped out the agricultural Herero people and took possession of their land. As the performers, three black, three white, gather to give their presentation, we see them struggling, stumbling, arguing. I’m black – I’m white – only I know the truth. A young black woman sees her grandmother’s face in a photo of a Herero woman. There are sad letters home from a lonely soldier, relentless killer of a despised people. An actor says, “I can’t do this. It isn’t me. I’m not capable of committing an atrocity.” But the revelation is when they each discover the potential for brutality they contain.

Author Jackie Sibblies Drury says, “I was inspired by my own inability to write something meaningful about the Herero Genocide, so I tried to write a play where the characters fail to do the same thing.” She has succeeded admirably and, with this cast, the improvisational style is so believable one wonders how firmly the staging is set. 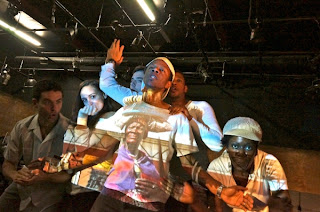 The set by John Iacovelli and costumes by Michele Dunn are appropriately modern/shabby, but the lighting by Michael Gend and sound by John Zalewski contribute immeasurably to the mood and enhance the serious undercurrents of the play.
Produced by Joseph Stern at The Matrix Theatre, 7657 Melrose Avenue, Los Angeles, through August 11. For reservations call 323-852-1445 or go to www.matrixtheatre.com.
Posted by THEATRE SPOKEN HERE by Morna Murphy Martell at 2:23 PM