I was part of the Off Off Broadway movement in New York in the 1960’s when, in defiance of the entrenched Uptown Theater Establishment, young people put on audacious and original shows. It meant you might see the worst example of personal egotism, or be present when a brilliant new talent exploded into life. I saw plays by then unknowns Sam Shepard, Lanford Wilson and John Guare. I saw future stars performing in dingy halls because this work freed their spirits. Today, this is what you will find in the Fabulous Hollywood Fringe Festival.

Participation in the Festival was completely open and uncensored. These productions were by independent performers as well as local, national, and international arts companies. By opening the gates to anyone with a vision, the festival was able to exhibit diverse and cutting-edge points-of-view. There were 200 shows presented in all and, although I only got to see nine, I was delighted by the quality of each one.

1. ORWELLIAN is a dramatic enactment by Larry Cedar from the works of George Orwell. Here is a fantastic example of an actor on top of his game who has made brilliant choices to dramatize. There is not a single false note from the moment he enters the stage. The physical exhaustion and sly humor in the amusing opening sequence “Down & Out in Paris and London” was viscerally real; as was the rage and indignation in “Animal Farm,” and the blending of love with the passion for freedom in “1984” - all there and vibrant. Orwell is one of my favorite authors and Cedar does him proud and, with our recent Big Brother-type scandals, shows great prescience in his choices. Note: If he plans to develop this into a full evening, “Shooting an Elephant,” an example of the madness inherent in Imperialism, will fit smartly into act one.
2. THE GOD OF CARNAGE. Ironically, I missed seeing the hit Broadway production because of the car bomber who parked a few yards away and I nonchalantly strolled to the box office while the loaded SUV was sputtering and sparking. Still, this was a dynamite production, with a brilliant cast, who never faltered in their depiction of seemingly sane people going Boom! Here's a play showing how under the veneer of Civilization lurks the threat of Chaos. The God of Carnage is waiting and when He strikes, watch out! This War is Hilarious. Here we are witness to loyalties shifting, man against man, woman against woman, men against women, wives against husbands, rages flaring, old wounds opened, resentments exploding and emotions ravaged. All great fun! Bravo to director Melody Rahbari and the Umwelt Theatre Collective.

3. BLUE KISS. In this intriguing encounter between a high school English teacher and a 17 year old girl student, all is not what it seems. Beneath the surface of an apparently straightforward drama, playwright Stephen Fife delivers a sly and brilliant conundrum. On the surface the teacher, excellent Jeremy Mascia, is trying to be kind and helpful to his devious visitor, an intense Julia Eringer. However, this young girl knows about a dark secret that lurks in his soul and, when she confronts him, he crumbles – or does he? She wants him to admit the truth, but how can we ever know the whole truth?  Even though I saw and heard it all, in the end I’m still not sure whether the truth was suicide or murder!   Words are only words and if, like in “Doubt,” the audience was polled, what would the verdict be?

4. THE SPOLIN PLAYERS. I was amazed, dazzled and definitely amused by the brilliant improvisations dealt by this fascinating company. Just think, every show you see will be new and different since suggestions come from the audience and scenes are created on the spot. Favorite sketches, done effortlessly yet with keen precision, included: a man drowning in a leaky submarine, with sound effects “drip drip drip” to curdle your blood; O.J. Simpson in jail deciding whether to have water or juice; a roundelay of gibberish conversations being translated by a cheerful moderator, and a couple searching in a haunted house for the remains of a (maybe) dead relative. All the sketches have sound effects added by members, moody piano music by accompanist Jake Anthony, and mind-boggling challenges of time, place and people. Viola Spolin started this genre in the 1930’s and her Spolin Players demonstrate her genius. Go!

5. KING PHYCUS. Move over Monty Python and make room for The Flynnsmen, a troupe who take on Shakespeare’s favorite plays with audacity and boundless energy. Here is Phycus, the King that Will forgot - or perhaps blended into about a dozen of his master works. The cast were all excellent and clearly right for performing (or goofing around with) Shakespeare's works. Having directed and/or performed in the plays they spoofed, I really got a kick out of the mix-ups and zany way of blending the plays without causing too much confusion. Especially loved “Hamlet & Juliet,” “Richard III & McBetty,” poor old “King Lear,” and the scheming Romans. The “Thriller” finale was a bonus! Congrats to All.

6. LISTEN CAN YOU HEAR ME NOW? This fascinating one-woman memoir by actress Gloria Rosen is about growing up with two deaf parents. Being a hearing child created an oppressive atmosphere for a young girl and the story of how she managed to survive her harsh mother is both shocking and amusing. It is a glimpse into a silent world that imprisons all who inhabit it in one way or another. Her mother forbade signing – she was a brilliant lip reader – but that cut young Gloria off from her father and created other problems. Still, I was saddened that Rosen did not let us appreciate her mother’s dilemma, i.e. how, in order not to feel handicapped her mother, born deaf, needed to make the whole people, the hearing ones, seem stupid. I’d like to have seen more compassion for her mother’s dilemma and perhaps an ending with understanding and forgiveness.

7. FRANK AND AVA. I just finished reading an excerpt from Gardner’s memoir (in Vanity Fair) about her years with Sinatra. Well, playwright Willard Manus certainly gets all the facts right in this intriguing if melodramatic short play. It’s never boring, but somehow they still didn’t ring true to me as human beings. Ava says they drank and fought and made love, and that’s pretty much what they do here. It’s a series of snapshot scenes: Frank’s depression over his failing career; Ava’s wild success in films; Frank’s decision to try for the role of Maggio in “From Here to Eternity;” their tempestuous marriage, their infidelities, etc. Still. Rico Simonini gets the Hoboken-kid gruff manner right on and Stefany Northcutt is able to suggest the seductive manner of a screen goddess. Bridging the scenes are Sinatra love ballads that underscore the emotions in the play. 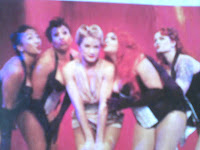 8. THE RUBY BESSLER CABARET. This is evidently a fictional reenactment of a 1940’s nightclub act by talented singer/writer Anastasia Barnes. Instead of a set there are four zoftic chorus girls, with white feather fans, who pose seductively while keeping in the background. They were quite a bevy of pulchritude but I felt this show could have succeeded just as well with a bare stage and the excellent piano accompaniment. The memoir stories gave Barnes a chance to show off her acting skills but, in spite of some racy dialogue, it’s all a little tame. Still, Barnes has a sweet voice and a pleasing way with her original songs that did capture the now seen-as-innocent days of early cabaret.

9. ÆSOPERA. Though I must confess Grand Opera is not my thing, yet I could see - and certainly hear - the talent in this company. Drawing loosely from a number of lesser-known Aesop’s Fables, this bravura ensemble engages us in a series of life-lessons. My favorite was the man who wants to create a flying machine and goes to the Oracle who asks him three questions about life. When he answers them correctly, she gives him the secret of flight. However, by pondering these enigmatic questions he realizes his invention can be used in war and, when his own son marches off seeking glory, the man wisely destroys his invention. Other parables were often difficult to follow as much of the words are lost in the soaring vibrations of full-throated singing. Still, opera lovers should appreciate this unique and daring show.
For more information or to contact any of these shows go to www.hollywoodfringe.org.