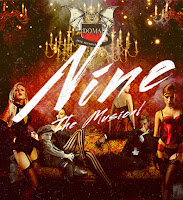 This is a superb revival of the Tony Award-winning musical, by Arthur Kopit (book) and Maury Yeston (music and lyrics), based on the Federico Fellini film, “8 ½.”   The show is a panoramic view inside the mind of a famous film director suffering from Creative Block. His imagination is failing, his wife is threatening divorce, his mistress is distraught and his former muse uncooperative. Through a series of surreal flashbacks we see the forces that are conspiring to drag him down: the women demanding attention, the nagging doubts and the haunting memories. It is only when he revisits his childhood when he was nine that he finds inspiration and is released.

Standouts in this fabulous ensemble are David Michael Treviňo as Guido searching for his lost creative potency; Melissa Anjose as his wife and only hope for sanity; Lovlee Carroll as his petulant mistress; Michelle Holmes as his nurturing yet demanding mother; Toni Smith as his elegant muse; Liza Baron as a demonic seductress, and Emilia Sotelo and Andrea Arvanigian as his demanding producers. Donovan Baise, as young Guido, is as sweet and innocent as one could wish.

The dynamic staging is by Marco Gomez; the dazzling choreography by Rae Toledo, and the vibrant musical direction by Chris Raymond. Clever scenic design by Amanda Lawson, lighting by Johnny Ryman, sound by David Crawford and costumes by Irvin Jimenez.
This DOMA Theatre Co. production is at The MET Theatre, 1089 N. Oxford Ave., Hollywood, through August. Tickets at 323-802-4990 or www.domatheatre.com

Reviewed in the August issue of NOT BORN YESTERDAY
Posted by THEATRE SPOKEN HERE by Morna Murphy Martell at 5:00 AM