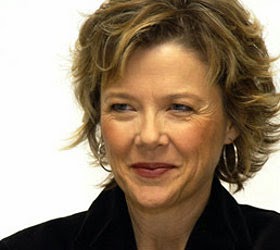 Drama Alert! This month, four-time Academy Award nominee Annette Bening will recreate a Ruth Draper performance, including the hilarious pieces The Italian Lesson, A Debutante at a Dance and A Class in Greek Poise. As there are only rare audio tapes of the legendary Draper in performance, this is a chance to see why she was awarded a CBE (Commander of the British Empire) in 1951 by King George VI (Father of the present Queen),  inspired characters in Agatha Christie's works, and influenced Lily Tomlin, John Lithgow, Emma Thompson and others.

Draper was an American actress who specialized in character-driven monologues in solo performances called Monodramas. She had the uncanny ability, while alone on stage, to shift between characters and fill the stage with vivid imaginary people. With a chair, a shawl, some hats and an occasional table as her only props, Draper dazzled audiences worldwide for nearly forty years.

The show is directed by Bening herself, who states, "I am in awe of Ruth Draper… and I look forward to the formidable challenge of breathing life into these stunning pieces."

Posted in the April issue of NOT BORN YESTERDAY.
Posted by THEATRE SPOKEN HERE by Morna Murphy Martell at 12:09 PM