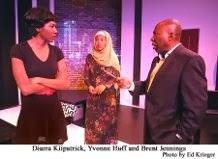 In playwright Wendy Graf’s deeply moving and challenging new play, two sisters meet across today’s great cultural divide and discover each other as family. Julia is a high-achieving African-American attorney in New York with a hot boyfriend and a great job. When her father tells her she has a Muslim half-sister she wants no part of it. Then Neyla, who has fled Iraq, turns up looking for sanctuary and, in trying to be tolerant and kind, Julia’s well balanced life implodes. 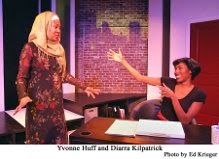 Not only family secrets shatter her composure but her own (and our) racial and religious certainties start to crumble under sudden fierce scrutiny. In music, “closely related keys” means “to share many common tones” and Graf uses this metaphor to illuminate how our differences, personal and political, are minor compared to our commonality. 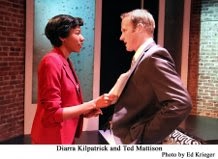 Diarra Kilpatrick as Julia is a spitfire hiding her vulnerability under a cynical demeanor; Yvonne Huff as Neyla is a gentle gal who erupts in anger at the callousness of the American culture; Ted Mattison as Ron is a robust lover brought up short by the paradox of racial difference; Brent Jennings as Mr. Charlie, Julia’s caring father, is torn between his two battling daughters, and Adam Meir as Tariq is a hunted man betrayed by those he helped win a war. 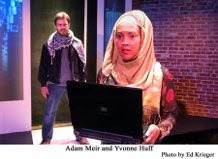