WAR OF THE WORLDS …in Hollywood 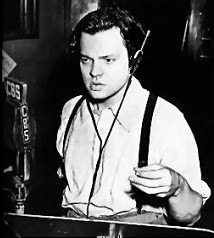 The Fake Radio Company specializes in re-enactments of old radio shows with period costumes, dated microphones and taped special effects. In celebration of Halloween, they recreated Orson Welles’ famous 1938 CBS radio broadcast adapted from H.G. Wells sc-fi novel. This is the one that caused people to panic and run for their lives. Yes, a fleet of Martians had landed in New Jersey and were marauding across the State into New York City with thousands fleeing and dying before them.

Hey, after sitting there eyes closed, with only my ears to give me the news, I often felt the urge to get up and run myself – it was that well done!

Less imaginative souls watched the actors as they read from the original script so they knew this was theater not breaking news. Deep inside I knew it too, but if I’d been listening back in 1938 you might have seen me dashing through the Holland Tunnel with all the rest of the fools.

Old-Time Radio Comedy Troupe, now in its 10th year, perform under the direction of David Koff. Next up is their annual Christmas show, “It’s A Wonderful Life,” with Ray Romano joining this delightful company. That’s December 18 at 8 pm at The Steve Allen Theatre, 4773 Hollywood Blvd.
Tickets at www.fakeradio.net.

A Fun Note: In 1966, the FCC enacted a rule that explicit disclaimers must be stated at close intervals on any such broadcasts to avoid misunderstandings. In 1974, WPRO-AM in Rhode Island aired it with the original storyline but said the landing was on Rhode Island and widespread panic ensued. In 1988, National Public Radio aired a remake - starring Steve Allen! - who as a kid had listened to the original broadcast 50 years before. This was nominated for a Grammy as “Best Spoken Word Recording.” No word of a panic in Hollywood.
Posted by THEATRE SPOKEN HERE by Morna Murphy Martell at 9:57 AM