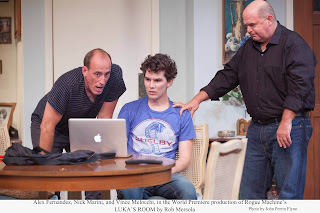 In this brilliant new play, by Rob Mersola, a naïve teenage boy goes to live with his grandmother and is given his absent father’s old room. He meets a bold young woman and brings her to his room where she introduces him to the imaginative joys of sex. For a few months he shyly discovers his appetite for sexual play with or without a partner. Then, to his horror, he discovers all his bedroom antics are being viewed publicly on the internet.

This sounds like an amusing concept, and in a way it is, but it’s also an indictment of our modern obsession with exhibitionism and the sad loss of privacy. There’s not a false note in this play, each character is complex and totally believable, but the author lays bare the cynicism of our age and how innocence can be just another product to be exploited.

Nick Marini is touching as the guileless Luka; Sarah Scott is dynamite as the uninhibited Angie; Alex Fernandez is exuberant as encouraging Uncle Nick; Joanna Lipari is moving as befuddled Grandma Franca, and Vince Melocchi is disquieting as Luka’s formidable Dad.

At Rogue Machine Theatre, 5041 West Pico Blvd, LA, through Sept 20. Tickets: (855) 585-5185 or www.roguemachinetheatre.com
Photos by John Perrin Flynn
Also reviewed in the September issue of NOT BORN YESTERDAY.
Posted by THEATRE SPOKEN HERE by Morna Murphy Martell at 9:59 AM