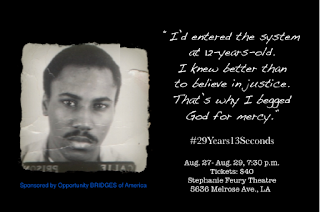 What happens to a man who is imprisoned for 29 years for a crime he didn’t commit? Does he sink into despair as he rages against the machine, or can he find meaning in his life so he reenters the world with dignity and a mission.

In this deeply engaging play, the inspiring saga of Vance “Duke” Webster is almost a parallel of Nelson Mandela’s journey to greatness. At age 17, Webster witnessed a murder and, due to the code of honor he lived by, did not “snitch.” Then tumultuous events in his personal life conspired to have him accused of that murder and thereby sent away to Folsom Prison.

In this eloquent play, adapted by Alexus Rhone based on the book she wrote with Webster, we witness the misunderstandings that robbed him of 29 years and yet see how one man, tormented and scorned, can stand proud when all seems lost. 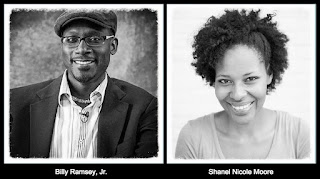 Billy "Issim Dark" Ramsey portrays Webster with naïve grace that aptly fits the shy man who speaks to us by words in the play, and in person, after the performance. Most amazing is Shanel Nicole Moore who not only directs with imaginative zest, but also swiftly transforms into a series of women, his lovers, his mother, and even one troubled young man right before our eyes.

Posted by THEATRE SPOKEN HERE by Morna Murphy Martell at 11:20 AM