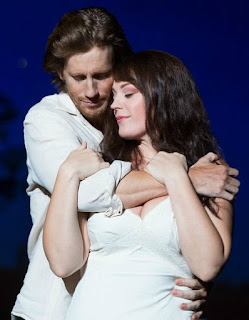 In case you missed the novel and the wildly successful film, this is a love story about an Italian war bride stifling in Iowa and a lonely traveling photographer who find each other in a four day passionate affair.

In this musical version, book writer Marsha Norman manages to bring an honest human dimension to this inherently sentimental tale. By making her husband and children major characters, and by bringing in townspeople who understand the need for something to brighten our lives, the tuneful saga is fully fleshed out.

The national tour cast is headed by Elizabeth Stanley as Francesca and Andrew Samonsky as Robert. Both are powerful singers although, with her operatic range, it was sometimes difficult to understand the lyrics while with Samonsky’s beautiful voice words were crystal clear.

The added dimension of Francesca’s family is fully delineated by Cullen R. Titmas as her kind down-to-earth husband, Caitlin Houlahan as her ingenuous daughter, and Dave Thomas Brown her headstrong son. 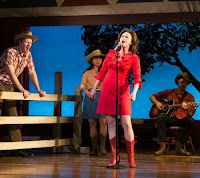 Katie Klaus as Robert’s ex-wife gives insight into his character through a lovely solo ballad, and Mary Callanan and David Hess are amusing as Francesca's nosy but friendly neighbors.

Also reviewed in the January issue of NOT BORN YESTERDAY.
Posted by THEATRE SPOKEN HERE by Morna Murphy Martell at 12:16 PM