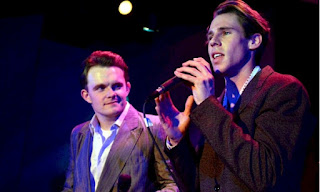 What a marvelous show! If anyone recalls the magical sounds of the Righteous Brothers get yourself over to James A. Zimmerman’s new musical and see them again. It’s a memory play as told by one of them (Paul Cady) after the duo have ended their run.

You are catapulted back in time as the two young men playing Bill Medley (Morgan Lauff) and Bobby Hatfield (Brenden MacDonald) are amazing. Their voices, their looks, their eager manner, are reminders of the days when singers grew to greatness through their own talent and enthusiasm. 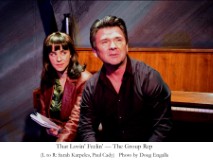 Their #1 hit songs: “You’ve Lost that Lovin’ Feeling” and “You’re my Soul and My Inspiration” will ring in your ears. Then when Bobby, demanding the right to be more than back-up to deep-voiced Bill, takes the stage and sings “Unchained Melody” and “Ebb Tide” I guarantee chills will run down your spine. What voices, what style, what talent! If you ever fell in love to the rhythm & blues don’t miss this.  Remember the two guys with “blue-eyed soul” and smile. 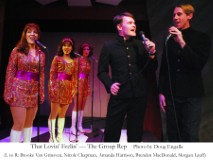 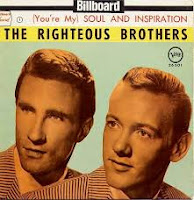 Also reviewed in the January issue of NOT BORN YESTERDAY.
Posted by THEATRE SPOKEN HERE by Morna Murphy Martell at 11:40 AM