MY SISTER …in West Los Angeles 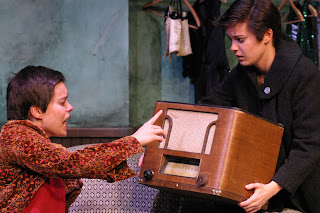 An award winner at the 2015 Hollywood Fringe Festival, this mesmerizing play is about identical twins in Berlin in 1930’s Germany who witness the rise of Nazism. One of the sisters is a cabaret singer, the other, the brilliant one who writes her materiel, is disabled by cerebral palsy.

We see how Magda must moderate her performances to please the ominous cabaret attendees; while from the shelter of their apartment Matilde realizes the oncoming tumult.  As they endure we are aware of the awful danger they face from the mad Nazi distortion of the science of eugenics.

Playwright Janet Schlapkohl wrote the play for identical twins Emily and Elizabeth Hinkler and their extraordinary identification with the relationship brings it vividly to life. There is not a moment that rings false, as we bear witness to their loving connection.

In her songs Emily (Magda) has a sweet melodious voice and saucy manner, but with her sister she is motherly and anxious. In her isolation Elizabeth (Matilde) writes savage anti-Nazi sketches and dark poems that show her awareness of the evil lurking outside. Although the story is set in tragic circumstances, the spirit of the play is life affirming and heroic.

Odyssey Founder Ron Sossi, who discovered the play at the Fringe, adds his direction to Paul David Story’s, to expand and enrich the staging. Original music is by Christopher Gene Okiishi with lyrics by Schlapkohl, and incidental music by onstage accompanist Barbara Rottman.

Also reviewed in the February issue of NOT BORN YESTERDAY.
Posted by THEATRE SPOKEN HERE by Morna Murphy Martell at 6:27 PM