A SENIOR’S GUIDE TO THE FRINGE …in Hollywood 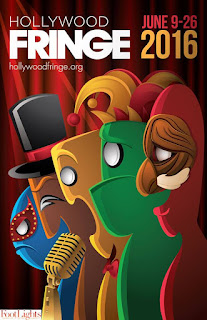 If you love live theater you don’t want to miss this year’s Hollywood Fringe Festival. It’s a plethora of riches, celebrating freedom of expression and collaboration in the performing arts community. Participation in the Hollywood Fringe is completely open and uncensored. By opening the gates to anyone with a vision, the Festival exhibits the most diverse and cutting-edge points-of-view you can imagine. With nearly 300 shows by passionate entrepreneurs you get to choose your favorites.

Along Theatre Row the numerous small houses will be buzzing with activity. Its like the early days of the Off Off Broadway movement in New York when I first cut my teeth playwriting & directing. There’s a free booklet listing all the shows, some with photos, with clear descriptions of what they’re about so you can choose your favorite topic. There are memoirs, biographies, theatre, comedy, cabaret, magic, dance, fantasies, musicals, horror, sex, drugs, and rock n roll!

My personal selections so far this year include Broadway veteran Tony Tanner’s Who Are You Anyway?; Stephen Adly Guirgis’ black comedy Den of Thieves; solo shows on Richard Pryor Pryor Truth, and Stokely Carmichael Power!; there's women who shoplift Sticky Fingers; a comedy Charlotte’s Shorts; Post Mortem Movement’s I Was Hamlet, and, written and directed by myself, Ariel Labasan in Yuri Speaks Out!  Here’s a link to the web-version of the Guide: http://www.hollywoodfringe.org/guide.

Now in its 7th year, with Ben Hill as Festival Director, the Hollywood Fringe is one of the largest open-access Arts Festivals in the world, with the 2015 Festival generating $400,000 in ticket sales. June 9-26. Tickets through www.HollywoodFringe.org.

Also posted in the June issue of NOT BORN YESTERDAY.
Posted by THEATRE SPOKEN HERE by Morna Murphy Martell at 11:41 AM