THE BOY FROM OZ …in Hollywood 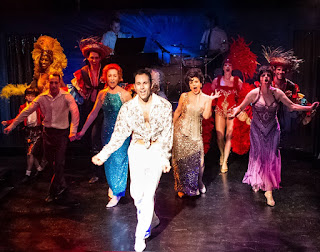 When this biographical show opened on Broadway in 2003, critics dismissed it by lauding Hugh Jackman’s performance as its only saving grace. Well, with time and a well balanced cast, Peter Allen’s journey is maybe more acceptable for modern audiences.

Here is a man who loves women but ends his life’s journey in love with one man. Coloring it all is his childhood dream to float away from a painful childhood by dancing and singing.

The subject is Show Biz and one young man’s passion for the bright lights and tip-tapping feet. Allen was involved with two great stars – Liza Minelli was his wife for 7 years and Judy Garland! was his mother-in-law. Perhaps this tips the balance of the show in making act one Diva Heaven but, in act two the story continues with perhaps less dazzle but more poignancy.

The production blasts away the walls of the tiny Lex Theatre and deserves to be moved to a larger house with its entire fine cast: Andrew Bongiorno as Peter Allen, Jessica Pennington as Liza Minnelli, show-stealer Bess Motta as Judy Garland, Michayla Brown as Young Peter, Kelly Lester as his mother, and Michael Mittman as his lover.

The songs are by Peter Allen, with book by Martin Sherman and Nick Enright. Directed by Michael A. Shepperd, musical direction by Bryan Blaskie, choreography by Janet Roston & multitudinous costumes by Michael Mullen.

Also reviewed in the June issue of NOT BORN YESTERDAY.


Posted by THEATRE SPOKEN HERE by Morna Murphy Martell at 11:53 AM