Can any man, especially a Southerner, be elected to the U.S. Senate if 1) He does not believe there’s a God and 2) He believes in strict gun control? Perhaps an even stronger question is 3) Can a man with deep and honest feelings ever survive in the political jungle?

In this world premiere staging of his unequivocally bold play, author Jason Odell Williams tackles this subject admirably. With a sensitive and bravura performance by lead actor Rob Nagle, these significant questions are asked and, in a contemporary way, fully answered.

Set backstage at an important rally shortly before election day, we are witness to the dynamic between a man fighting to save his soul; his manager battling to win the votes by keeping her client’s instincts in check, and his indomitable wife seeing him as her hero who someday might bring them both to the White House. 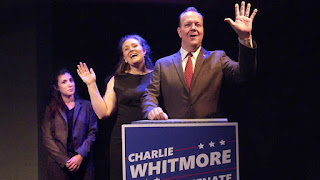 Under Elina de Santos faultless direction, we are drawn into the lives and experience the conflicts between three impassioned people. Nagle demonstrates the man’s ambiguity, while Tracie Lockwood is right on as his headstrong wife, and Annika Marks shows a professional who is able to avoid cynicism. Eddie Hong, in two small roles, brings focus to the power of the modern outside world.

Photo by Ed Krieger
Also reviewed in the August issue of NOT BORN YESTERDAY
Posted by THEATRE SPOKEN HERE by Morna Murphy Martell at 12:55 PM