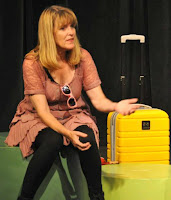 Emmy-winning writer and performer Leslie Caveny (Everybody Loves Raymond) pulls out all the stops in this madcap view of one woman’s screwed-up life and how, with grim determination, she intends to make it right. 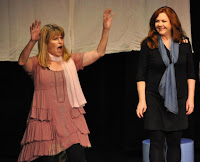 More stand-up comedy than legitimate theater, Caveny plays a troubled gal doing a one-woman show where she forgets the lines, the prompts, and eventually all sense of decorum. As she drags her mother (or two) up from the audience, the performance spins off into an ever-shifting confrontation with her presumed past.

Added to this are amusing conflicts with her girlish stage manager (Anne Leyden), her all-business lighting man (Frank Gangarossa), her hostile surrogate stage mother (Sheila Shaw), her reluctant 2nd mom (Seemah Wilder), and the Audience, until it’s all-out war. Having often experienced the reality of backstage conflicts during intense rehearsals, there is a recognizable sense of reality to this otherwise fanciful show.

The topical songs are aided by hidden accompanist Tom Adams, with clever lighting by Yancey Dunham, and colorful projections by Austin Quan. The improvisational tone is captured throughout by Maria Burton’s artful direction. Produced by Benjamin Scuglia. 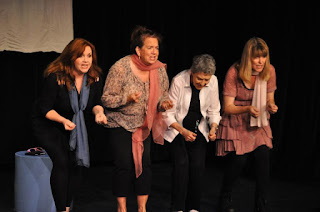 Running time 70 Minutes. FREE parking in lot across the street.

Also reviewed in the October issue of NOT BORN YESTERDAY.
Posted by THEATRE SPOKEN HERE by Morna Murphy Martell at 4:30 PM