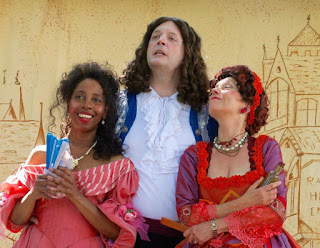 In 1660, England’s Puritan ban on theater was lifted, and this 1675 sex romp by William Wycherley is perhaps the bawdiest of Restoration comedies. A satirical farce, the name of the hero, Horner, is appropriate for a horny guy who revels in putting horns on his male friends by openly seducing their wives. Even the title is a pun! Horner claims to be impotent so that husbands and guardians will suppose him a safe companion for their women. His ruse fools the men of London ensuring Horner his way with any and every woman, especially the beautiful, naïve and newly married girl from the country, Margery.

Even though we are outdoors we don’t miss a word, as the excellent cast hit just the right vocal and physical pitch. Michael Hovance as Horner is an elegant rascal; Rebecca Lincoln as the Country Wife is a delightful minx; Alexander Wells pompously funny as her jealous husband; while Mel Green is hilarious as a dopey fiancé to beautiful Lonnie Silverman who only has eyes for sweet talking Daniel Olson. Rounding out this terrific ensemble are Jean Gilpin, James Loren, Kathy Bell Denton, Donald Wayne, Christina Jacquelyn Calph and Virtic Emil Brown. 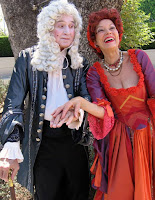 Photos by Garth Pillsbury
Posted by THEATRE SPOKEN HERE by Morna Murphy Martell at 10:27 AM