THE MAN WHO CAME TO DINNER …in Hollywood 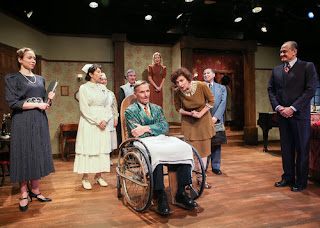 It’s the hilarious George S. Kaufman and Moss Hart tale of the obnoxious celebrity who falls on the ice in front of their doorstep and stays and stays. Having never seen Play nor Movie I realize now what I’d missed, so don’t you do the same.

I urge you to get over to Actors Co-op because at this time we need all the laughter we can get. The direction by Linda Kerns is crisp and magical and the 18-member cast are all marvelous. Go! I guarantee you’ll thank me for it. 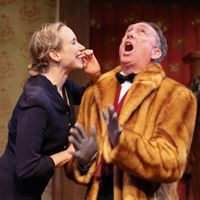 Heading the superlative cast is Greg Martin, who dominates the action as the troublesome guest; Natalie Hope MacMillan is an angel of patience as his assistant; Deborah Marlowe & Lawrence Novikoff amuse mightily as the embattled hosts; Catherine Urbanek is marvelous as a voracious blonde bombshell; Irwin Moskowitz adorable as a doctor with a punctured dream, and Wenzel Jones a standout as witty singing guest, Noel Coward.

Jean Kauffman delights as a beleaguered nurse; John Allee as a Marx Brother; Brenda Ballard as a ditzy lady with a past; Kyle Frattini & Lila Hood as two kids with a dream; Connor Sullivan as an honorable newspaperman; Karen Furno as a bedazzled cook; and Kevin Michael Moran, Hunter Lowdon, Goreti da Silva and Chris Savell in multiple roles.
,
Produced by Thomas Chavira, with 1930’s set by Nicholas Acciani, costumes by Shon LeBlanc, hair/makeup by Amanda Walter and amazing props by Ernest McDaniel.

Also reviewed in the December issue of NOT BORN YESTERDAY.
Posted by THEATRE SPOKEN HERE by Morna Murphy Martell at 11:08 AM