DEAR READER:
There is so much great live theater in Southern California, and my lifelong passion has always been to see it all and share my enthusiasm with you. Back when I was the Broadway critic for the Hollywood Reporter, my New York apartment was about a five-minute walk from every Broadway theatre. I saw and reviewed everything. Now that I live in Los Angeles, the distances to exciting theater are often daunting, so most of my reviews have been for shows within a comfortable drive from home.
Yet NOT BORN YESTERDAY covers a far vaster canvas. Often I learn of a fabulous show opening in Long Beach, or La Mirada, or Santa Ana, that I am unable to cover. So, as live theater is the passion I want to share with you, from now on I will tell you of my choices and recommendations. Hopefully, after experiencing one of these shows, you will share with me your personal opinion. 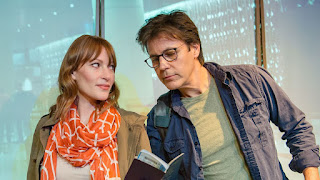 Actors Brea Bee and Marshall McCabe, play two strangers on the run from loneliness who happen to meet in an airport lounge in Burma. Their search for a missing monk might be their last chance to find true love - if they can seize it! Inspired by a trip she took to the Far East in 2015, author Wendy Graf wrote this romantic comedy, noting, “The trip highlighted and encapsulated for me our modern sense of feeling adrift, seeking something without knowing quite what.” Directed by Maria Gobetti. Victory Theatre Center, 3326 W Victory Blvd, Burbank. Tickets: 818- 841-5422 or www.thevictorytheatrecenter.org
ENGAGING SHAW (Beverly Hills)
This romantic comedy is based on heiress Charlotte Payne-Townshend’s pursuit of the famous playwright, critic, socialist and egotist, George Bernard Shaw. He claimed marriage was "an abomination and a nightmare" but in John Morogiello’s witty play, through spirited debate, heated emotion and the occasional flinty spark of desire, she prevails. As directed by Melanie MacQueen, it’s thought-provoking fun. Theatre 40, 241 S Moreno Drive, Beverly Hills. 310-364-0535 or www.theatre40.org.
THE MADRES  (Los Feliz) 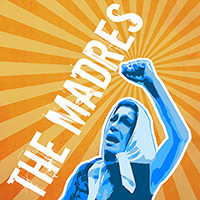 In this drama by Stephanie Alison Walker, three generations of women face state terrorism in Buenos Aires. Based on the women in Argentina who, in 1977, defied the government’s efforts to terrorize its people into silence and submission. People were disappearing off the streets but no one dared talk about it, and the mother’s quest to find the bodies of their missing children gave birth to a whole movement. The Madres de La Plaza de Mayo de Los Desaparecidos, inspired generations of artists and activists to resist and persist. Skylight Theatre, 1816 N Vermont, Los Feliz. 213-761-7061 or SkylightTix.com 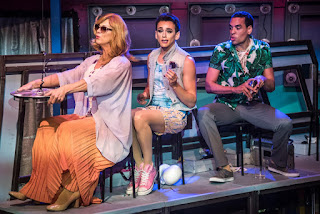 PRISCILLA QUEEN OF THE DESERT  (Hollywood)
This hilarious yet touching musical is based on the 1994 hit film about two drag performers and a transgender woman driving across the Australian outback in an old bus and performing cabaret. Their musical road trip includes dance numbers It’s Raining Men and I Will Survive. The film’s positive portrayals helped introduce LGBTQ themes to a mainstream audience. Book is by film’s author/director Stephan Elliott and Allan Scott. Directed by Jessica Hanna. Celebration Theatre, 6760 Lexington Ave, Hollywood. 323- 957-1884 or www.celebrationtheatre.com