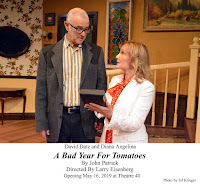 In this wacky John Patrick comedy, it’s 1975 and a famous actress leases a house in Vermont to write her autobiography. To shoo away the annoying nosy neighbors, she invents a mad, homicidal Sister Sadie - herself in a fright wig bearing giant scissors - to scare off visitors. 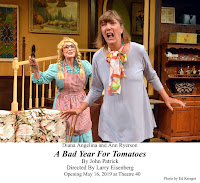 However, a local handyman falls for this dynamic psycho, and some local ladies decide to bring the woman to a religious rally to save her poor soul. When, in trying to get them all to leave her alone Myra says her demented sibling has gone off to Boston, she comes under suspicion of murder! 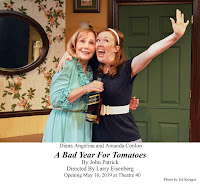 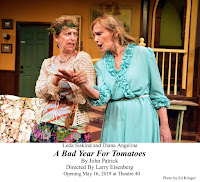 It’s a silly but fun show as Hollywood escapee Myra (Diana Angelina as the only sane person in the town), hides out in Vermont to write her memoirs. Well, as the neighbors arrive to welcome the newcomer this town makes Peyton Place seem like paradise.


Director Larry Eisenberg pulls out all the slapstick spots he can find before surrendering us to the happy ending. The late Playwright John Patrick is best known for Teahouse of the August Moon that garnered him the Pulitzer Prize and The Tony Award for drama, as well as the screenplay for personal favorite Love is a Many Splendored Thing. 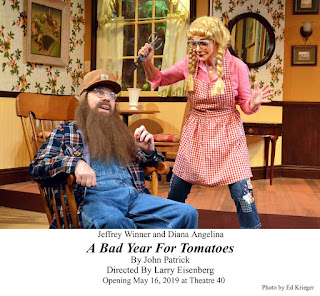 Posted by THEATRE SPOKEN HERE by Morna Murphy Martell at 11:49 AM