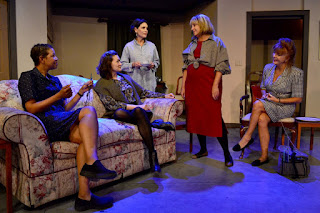 In Theresa Rebeck’s potent comedy, five New York City women meet once a week to make sweaters and scarves but, apparently, do everything but knit!

It’s a delightful play with a fabulous cast: Margie (Julie Davis) is a loquacious wanna-be actress desperate to find Mr. Right while blasting men. Gina (Lisa McGee Mann) is a lawyer who, after being made redundant, tries to knit her way back to authenticity. Paula (Cathy Diane Tomlin) is a therapist who wonders if she helps, or damages, her clients by anything she ever says or does.

Lily (Stephanie Colet) is an Earth Mother attempting to save the world, and her friends, when all seem about to crash and blaze. Liz (Marie Broderick) is the dynamic glamour gal who men adore because she is such a fabulous challenging bitch. Bob (Doug Haverty) is happily married to the perfect wife, but still panting after the girl of his dreams.

Miles (Todd Andrew Ball) is the blind date from hell – a suave, rich, highly connected, handsome bachelor who threatens to break up their weekly knit circle. He’s quite a catch, but clearly a shark when it comes to business and women. Still, the prize he seductively dangles brings our gaggle of knitters to philosophically question their own lives and purposes.


Posted by THEATRE SPOKEN HERE by Morna Murphy Martell at 10:47 AM