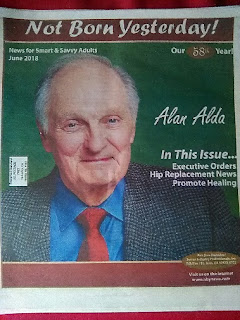 The character of Don Juan was first created in 1630 by Spanish playwright Tirso de Molina, as a tragic drama about a libertine on the pathway to Hell. Now the Classical Theatre Lab has transformed what was then a grim tale into a totally hilarious farce. Adapted by British playwright Nick Dear, this tale of a notorious cad getting his come-uppance is a total delight. In a shady outdoor garden, Carlo Figlio as Don Juan heads a superb cast of proud royals, sullied maidens, and saucy attendees. Plaudits to director Suzanne Hunt for capturing the exact tone of merriment while making sure, even in the outdoor setting, every word and gesture resonates clearly. Elegant costumes by Susan Deeley-Wells and daring swordplay by choreographer William Hickman. Presented by City of West Hollywood at Kings Road Park, 1000 N. Kings Road, WeHo. Info: classicaltheatrelab@gmail.com or (323) 960-5691.
LOOT (West Los Angeles) Review
Last month I listed this Joe Orton play and, after seeing it, I guarantee you’re in for a delightful surprise. An outrageous, farcical and absurdist writer, his characters seem in many ways more believable than what’s often presented onstage as real life! In this madcap romp two young men rob a bank, try to hide the money in an occupied coffin, gain a beautiful shrewd accomplice, and are hunted down by a maniacal police inspector. All the actors are marvelous, with impeccable accents from various regions of the British Isles, and project loudly so no dialogue is lost. Bart DeLorenzo directs with the carefree flair of one born and raised in a madhouse. At Odyssey Theatre, 2055 S. Sepulveda Blvd. West LA. Tickets: www.OdysseyTheatre.com or (310) 477-2055 ext.2. Not to miss!
LOOSE KNIT (North Hollywood)
Once a week in New York City five women gather in a knitting circle but, as the scarves and sweaters pile up, their lives unravel. Gina loses her job, Paula is having an identity crisis, Liz is having an affair with her brother-in-law and Margie just wants to find a man. When a handsome millionaire shows up looking for a wife the circle becomes a dating game. On a series of blind dates, Miles and each woman go head to head, humorously attempting to figure out what they really want. Playwright Theresa Rebeck outlines this battle between the sexes with wit, ferocity and insight to create a contemporary comedy of manners. Directed by L. Flint Esquerra and produced by Katelyn Ann Clark for Group Rep. At Lonny Chapman Theatre, 10900 Burbank Blvd. NOHO. Tickets: www.thegrouprep.com or (818) 763-5990.
PASS OVER (Atwater Village)
In this modern take on Waiting For Godot, two men stand on the corner talking boisterously and aggressively, passing the time, hoping that today a miracle will come. Award-winning playwright Antoinette Nwanda crafts their everyday profanities into poetic and humorous riffs, to expose the human spirit of young black men who dream about a promised land they’ve yet to find. Historical, religious and pop culture references collide in this meditation on race, manhood, and the cycle of violence that prevents so many from realizing their full potential. According to Nwanda, “This play asks us collectively to consider the value of the lives of young black men who are not entertainers, or athletes, or secret math geniuses.” Deena Selenow directs for Echo Theater Co. Atwater Village Theatre, 3269 Casitas Ave, LA. Free on-site parking. Tickets: www.EchoTheaterCompany.com or (310) 307-3753.


NBY. JULY,2019 COLUMN
THE PRODUCERS  (Hollywood)
Celebration Theatre, under the artistic direction of Michael A. Shepperd, presents the hilarious Mel Brooks and Thomas Meehan’s hit musical about two luckless Broadway producers. Based on Brooks’ 1967 movie, it’s the story of a sleazy theatrical promoter and his neurotic accountant who scheme to get rich by overselling interests in a Broadway show that’s sure to be a flop. Complications arise when the show, that makes fun of homosexuals and Nazis, turns out to be a roaring success. Director Michael Matthews (I still remember his fabulous work on “Peter Pan; the Boy Who Hated Mothers”) brings his take to this; as does choreographer Janet Roston (likewise her “Mutt House” musical). Anthony Zediker is musical director. Presented with the support of the City of West Hollywood’s Arts Division and produced by Andrew Carlberg and Rebecca Eisenberg. At Celebration @ the Lex Theatre, 6760 Lexington Ave, Hollywood. Tickets: 323-957-1884 or www.celebrationtheatre.com
LOOT  (WEST LOS ANGELES)
Joe Orton was a young British playwright whose outrageous dark comedies scandalized theater audiences in the 1960s. After winning a scholarship to RADA in 1951, he met actor-writer Kenneth Halliwell who became his lover and mentor. In his rapid-fire writing Orton wrote shocking and unconventional plays examining moral corruption, authoritarian abuse and hypocrisy. Tragically, in 1967, his life was cut short when Halliwell killed Orton, then himself. In this darkly comic masterpiece, Hal and Dennis rob a bank next to a funeral parlor and hide the money in the coffin of Hal’s recently deceased Mum. But her corpse keeps reappearing at the most inopportune times. Nothing is safe from Orton’s savage wit, whose targets include religion, attitudes towards death, police brutality, corruption, and everything in between. Directed by Bart DeLorenzo. At Odyssey Theatre, 2055 S. Sepulveda Blvd. Los Angeles. Tickets: 310-477-2055 ext2 or www.OdysseyTheatre.com
DEATH OF A SALESMAN  (Santa Monica)
Since its initial opening in 1949, when Arthur Miller’s drama won the Pulitzer Prize, numerous name actors have portrayed Willy Loman (from Fredric March to Dustin Hoffman). Considered by many to be the role-of-a-lifetime, now TV star Rob Morrow is making his Los Angeles theatre debut as Willy in the Ruskin Group Theatre’s production. More than a museum piece, the play is strikingly relevant in our times as Willy desperately tries to hold on to his “American Dream” in spite of personal and financial failures. Director Mike Reilly says: The Loman family struggles with the same social, economic and environmental pressures that we seem to keep experiencing in our own lives. Yet, at the center of this story is the deeply personal human tragedy of Willy Loman and his family. Produced by John Ruskin and Michael R. Myers. At Ruskin Group Theatre, 3000 Airport Ave. Santa Monica. Tickets: 310-397-3244 or www.ruskingrouptheatre.com. Ample Free Parking.
AN ENEMY OF THE PEOPLE  (Topanga Canyon)
In Henrik Ibsen’s classic drama, the water in a popular tourist spa in Norway, at the heart of a local town’s economy, is discovered to be contaminated. When powerful people decide to put commercial interests above the health of visitors, the town doctor speaks out against the town leaders. For this he is declared the enemy and is soon threatened with violence. A timely play that adapter-director Ellen Geer has reset the events in the small town of South Fork, South Carolina in the 1980s, where issues of race further compound the economic concerns at stake. At Will Geer’s Theatricum Botanicum, 1419 N. Topanga Canyon Blvd. Topanga, CA. Tickets: 310-455-3723 or www.theatricum.com. Performances continue through Sept. 28.

Posted by THEATRE SPOKEN HERE by Morna Murphy Martell at 11:54 AM