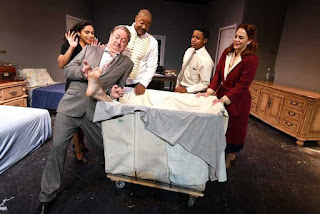 In this madcap tale it’s 1942, and a young African American law student (Ken Ivy) is given the “colored” suite in a Los Angeles luxury hotel. Since he is there to study overnight for his upcoming Bar Exam he tries to make the best of it. However, the affable bellhop (Damon Rutledge) warns him there may be a few folk climbing in the window, but not to worry!

Well, as it turns out one wacky visitor (Darrell Philip) brings the law to him in more ways than expected and, even if the law books remain unopened, he ends up with a sweet if fiery girlfriend (Chauntice Green). Don’t even ask about the adulteress (Stephanie Schulz) and the mobster (Stephen Tyler Howell) who enter through the doorway!

Author George W. Corbin, whose fine “Daughters of the Kush” I recall as a sophisticated drama, is here channeling the Marx Brothers to a quite hilarious degree.

However, mischievous director C. Julian White forgot that audiences need to hear, as well as see, since his excellent actors spoke so softly and intimately to each other that about 50% of the dialogue was incomprehensible. Otherwise, a great deal of fun was had by all.


Posted by THEATRE SPOKEN HERE by Morna Murphy Martell at 11:15 AM