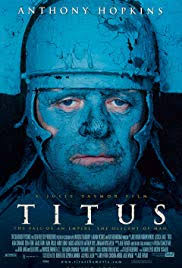 Having directed a production of this really sadistic play, and after shuddering through Julie Taymor’s gruesome film TITUS, I am always reluctant to attend live performances of this play. Well, a braver soul than I, name of Mikey Mulhearn, just gave the lie to my timidity with a bold production at the Kimpton Everly Hotel in Hollywood. Mulhearn presents non-traditional Shakespeare with his gender-bending company SHAKESPEARE ON THE DECK now in its 2nd year.

My theater colleague, costume designer Tricia Stubbs, has been urging me to come along and see for myself the unique approach of this new group. Here are her comments after attending a performance of Titus last month:
“This play was first performed somewhere between 1590-1594 making it one of his earlier plays and his first tragedy. The setting tells the story of the fictional Roman general, Titus Andronicus, who comes back from a 10-year war with the Goths where he has lost 21 of his sons. He returns with Tamora, Queen of the Goths, as hostage with her 3 sons. When he sacrifices her eldest son in revenge for his own dead sons, he sets off a chain of horror starting with the rape and mutilation of his own daughter.
This production was both brilliant and powerful, each character well defined, each actor speaking their lines clearly, distinctly and with true passion. Shah Granville (Titus), Keaton Shyler (Tamora), Nima Rad (Lavinia) and Jahel Caldera (Aaron the Moor) head this superb gender neutral and race neutral company. Although there was no comic relief in this play, the fact that a white liquid was used in place of red blood lightened this otherwise very heavy show.” 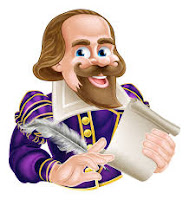 Mulhearn directs his own adaptations of each play and transforms the space beneath the hotel’s Everbar into a fantastic otherworld. A new program, "Shakes After Dark," will include folio classes, public readings, fight nights, and free Shakespeare in a bar. For info: www.shakesonthedeck.com

Posted by THEATRE SPOKEN HERE by Morna Murphy Martell at 11:10 AM