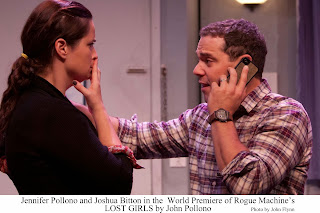 A divorced couple are forced to confront each other, and their past, when their beloved 17 year old daughter vanishes in a snowstorm. It’s every parent’s nightmare and we witness the tormented mother, and the guilt ridden father, as they hold a seemingly hopeless vigil together. These are people who express their emotions openly, speak from the heart, and care nothing for the hurt feelings of others. 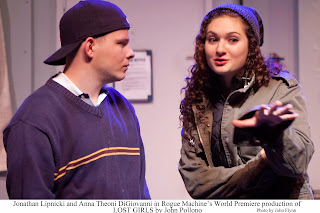 We are intrigued by this domestic drama, but then author John Pollono confounds us and nothing is as it seems. We discover the runaway girl in a motel, with a boy, apparently believing they’ll hardly notice she’s gone, delighting in a great adventure and oblivious to any pain this might cause them. 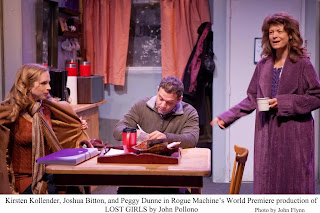 The play itself is riveting, and its impact is enhanced by the intensity of the performers. Jennifer Pollono is the mother trying desperately to hold herself together; Joshua Bitton is the father haunted by his own failings; Anna Theoni DiGiovanni is a rebellious teen seeking assurance of her real worth; Jonathan Lipnicki is an awkward young man maturing before our eyes; Kirsten Kollender is the new wife treading awkwardly between smugness and caring, and Peggy Dunne is the grandmother accepting a family tradition with bemused forbearance.

Brilliantly directed by John Perrin Flynn, with simple and effective set by David Mauer, lighting by Jeff McLaughlin and sound by Peter Bayne. Cleverly distracting costumes are by Caitlin Doolittle.

Reviewed in the December issue of NOT BORN YESTERDAY.