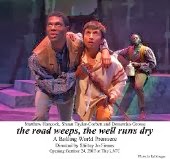 Playwright Marcus Gardley gives a passionate look at the relationship between two marginalized cultures in 1850 – former slaves and Seminole Indians – in the Territory that later became Oklahoma. Wewoka, the first incorporated all-black town in the U.S., contained Black-Seminole Freedmen who had been driven from Florida in the forced migration known as the Trail of Tears. Here were people bonded together, trying desperately to control their own future, but who were assailed on all sides by enemies, i.e. other Indian tribes and the militant US government. 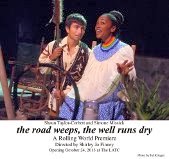 Within this turmoil live two families, connected by a memory of past brotherhood, until a Seminole takes on the role of sheriff and makes his formerly once-loved 'brother' a vassal at his whim. Just when it seems that the delicate love between their children will bring unity, the oppressed takes his revenge on his 'master’s' son. This shatters the balance of power and, through a series of mystical events, Wewoka is now cursed and endures a drought that continues for decades.

The cast are all outstanding: Demetrius Grosse is an ex-slave raging against his past and at war with the future; Brent Jennings is an old shaman who refuses to surrender his powers; Simone Missick is a girl who, through loss, finds her strength as a woman; Shaun Taylor-Corbett subtly portrays three young men connected by tragedy; Monnae Michaell is spine-chilling as a vengeful sorceress; Nakia Secrest is a Bible-thumping harridan and Darryl Alan Reed is delightful as her henpecked preacher-husband; Matthew Hancock is impressive, both as an escaped slave and an eager Union soldier; Darrell Dennis is a once proud and arrogant man brought to his knees; Elizabeth Frances is a shrewd and determined mother and wife, and Montae Russell is endearing as a lothario who, through warfare, has lost his handsome looks.

Note: For further enlightenment on the history of the Freedmen, known as Black Seminoles, an exhibit in the hall outside gives a rich portrait of their entwined destinies. Through the Lark Play Development Center, this play is also being produced at the Latino Theater Company, Perseverance, Alaska; Pillsbury House Theatre, Minneapolis, and the University of South Florida. Information on all of the productions can be found on the national blog http://theroadweeps.org.
Posted by THEATRE SPOKEN HERE by Morna Murphy Martell at 2:02 PM