BY THE BOG OF CATS …in Burbank 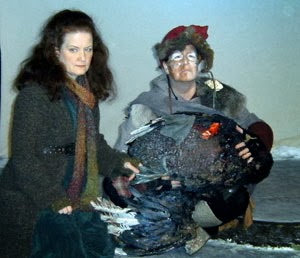 In this dynamic play, Irish author Marina Carr gives life to the familiar lines from Congreve: “Heav'n has no Rage, like Love to Hatred turn'd, Nor Hell a Fury, like a Woman scorn'd.” Set in a small town in Ireland, Carr focuses on the Gaelic love of language, myth and superstition. Hester is a magnificent woman who had taken in a callow youth, Carthage, and transformed him into a man of ambition and intelligence. The fact that he is now fed up with her domination and seeks to advance himself through marriage to an heiress enrages her. In her mind she owns him and is determined to ruin him. On the surface it’s a modern retelling of Medea, but Carr gives this vengeful ex-wife a deeper motive for her final actions. Hester has a tragic back story, a painful secret, with a sorrow that time has never abated. 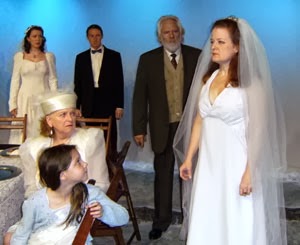 Kacey Camp is magnificent as the wrathful Hester; Joseph Patrick O’Malley suitably enraged as the harassed Carthage; Talyan Wright is adorable as their young daughter Josie; Barry Lynch is imperious as the local seigneur then tender as a loving father; Casey Kramer is wonderfully eccentric as a blind but far-seeing sibyl; Erin Barnes is touching as the troubled bride, and Rebecca Wackler is delightful as the chatty mother-in-law. Fine in smaller roles are David Pavao as an enigmatic visitor, Erin Noble a concerned neighbor, Shelley Kurtz a tipsy priest, Aidan Bristow a lost ghost and Jacob Lyle a cool-headed waiter.

Under Sean Branney’s superb direction the actors rise to Shakespearean levels of emotion. The wind-swept scenic design by Arthur MacBride is well lit by Bosco Flanagan with imaginatively evocative costumes by Michéle Young.

At The Banshee Theatre, 3435 W. Magnolia Blvd., Burbank, through Dec. 8. For tickets call (818) 846-5323 or visit www.theatrebanshee.org. By the Bog of Cats originated at the Abbey Theatre in Dublin where Carr was an Artist in Residence.

Posted by THEATRE SPOKEN HERE by Morna Murphy Martell at 11:42 AM