A WORD OR TWO …at the Ahmanson Theatre 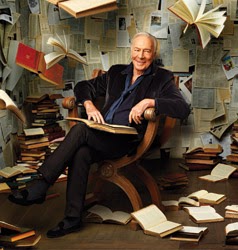 Christopher Plummer is in town for just 16 performances in this emotionally potent one-man play that the New York Times called “a passionate love letter to language…” Plummer grew up in Montreal reading Shakespeare, Ben Jonson, George Bernard Shaw, Rudyard Kipling, A.A. Milne, Lewis Carroll, Lord Byron, Dylan Thomas, W.H. Auden, Stephen Leacock, etc. and was “hooked on the intoxication of words.” Here is a celebration of the poetry and literature that has meant the most to him, stitched together with ruminations that range from mothers to strippers, jazz to cabaret, religion to death.

Plummer begins in his boyhood, spying Lewis Carroll's "aged man, a sitting on a gate" only to find himself at 82 becoming that fellow, as old age arrives more quickly than you think! So what to do? He quotes Oscar Wilde: "No man is rich enough to buy back his own past!" He talks of Dylan Thomas, whom he once hung out with in New York. What about Love? Religion? With these usual solutions to our existential angst banished from the stage, Plummer's reassures us that, for him, "the power of the writer's words make death and decay bearable."

The show is directed by Des McAnuff, although written and arranged by Plummer who is surrounded onstage by a tower of books angling up, over and behind him, as eloquent witness to his passion.

Reviewed in the January issue of NOT BORN YESTERDAY
Posted by THEATRE SPOKEN HERE by Morna Murphy Martell at 7:26 PM