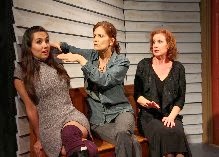 If you love the comedy “It’s a Wonderful Life” this modern variant by playwright Phil Olson is just for you. You see, Mom, who has been dead nearly a year, has to accomplish a task to earn her wings. Her eldest daughter, Kat, is estranged from Dad, blaming him for Mom’s death and suspicious of his relationship with Mom’s former nurse. Mom shows up at Dad’s birthday party hoping to reconcile them but, unfortunately, the only person who can see or hear her is the angry Kat. Trying to get through to this gal, who is in a court-ordered Anger Management Program, is not easy. Still, here is a mother undaunted and, under her loving energy, Kat, Dad, Nurse, bratty Kid Sister and the shy Boy Next Door all finally reconcile in loving harmony. 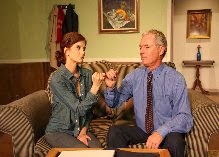 Julia Silverman is delightfully warm and gracious as Mom; Gina Yates is a troubled hellcat as Kat; Chris Winfield is touching as the grieving Dad; Lisa McGee-Mann is ingenuous and sweet as Nurse Trish; Trisha Hershberger is amusing and lively as kid-sister Brittney; Cyrus Alexander is appealing as Kevin, the faithful boy next door, and an offstage Mystery Voice is hilarious as their nutty neighbor, Mrs. Norquist.

Director Sherry Netherland balances deftly between comedy and emotional truth so the play is inspiring and never grim. Chris Winfield has designed a faultless Minnesota home that is enhanced by Steve Shaw’s sound design, Sabrina Beattie’s lighting and Lynda Pyka’s costumes. Produced by Laura Coker for The Group Rep. 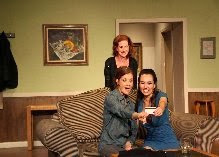 Also reviewed in the January issue of NOT BORN YESTERDAY.
Posted by THEATRE SPOKEN HERE by Morna Murphy Martell at 7:43 PM