DON’T LEAVE IT ALL TO YOUR CHILDREN ...Sherman Oaks 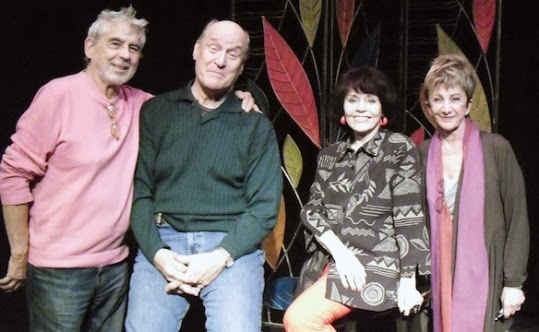 This musical comedy revue is directed towards Baby Boomers and Beyond with the emphasis on staying alive and enjoying it! The ALL in the title is LIFE itself and librettist-humorist-songwriter-director Saul Ilson knows from where he speaks. At the opening performance, Ilson himself stepped in for a missing performer, explaining drolly, “I’m the only person who knows the show well enough.” Actually, even alongside three musical comedy pros with Broadway credits, his cool manner added to the charm of the sweet songs, brief sketches, and rather dear old jokes.
Leading the cast is the glamorous Marcia Rodd, who we last saw locally in “The Beat Goes On,” humorously singing that “Age is Not A Factor” and “Another Wrinkle,” while looking barely 40 years old; the charming John Shull, reminding us of the memorable “Ed Sullivan” days, then becoming a doting grandpa in “My Grandchildren and Me”; the piquant Barbara Minkus, giddily reporting on “A Singles Cruise,” then grimacing over holiday gatherings of the dreaded “Relatives.” Ronnie Schell’s numbers, “You’re A Boomer” and “A Wonderful Life” were ably crooned by Ilson with a wry smile and a shrug that endeared him to the packed house.
Produced by Diane Baroni, who co-produced the NY production with its creator. Dexterous piano accompaniment is by musical director Ron Rose.
At the Whitefire Theatre, 13500 Ventura Blvd., Sherman Oaks, Sundays only at 2 pm, through March 30. TICKETS: (800) 838-3006 or www.brownpapertickets.com/event/526560
Reviewed in the February issue of NOT BORN YESTERDAY
Posted by THEATRE SPOKEN HERE by Morna Murphy Martell at 10:33 AM