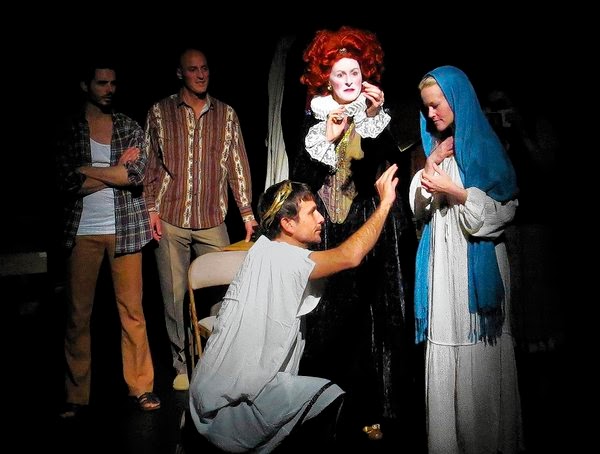 In this three-part saga, playwright Sarah Ruhl’s kaleidoscopic view of life is revealed through the backstage romancing, social conflicts and political shenanigans of different historic eras.

In the show, three different acting troupes are staging a pageant on the death of Christ in 16th century England, then Nazi Germany, and finally 20th century South Dakota. In these enactments locals of the time squabble, seduce each other and rehearse the crucifixion, seemingly oblivious to the threats looming via their government leaders.

Illustrious visitors to the pageants include the warlike Catholic-persecuting Queen Elizabeth the First, the high-booted snarling Adolf Hitler, and the chirpy half-distracted Ronald Reagan. It’s a heavy show, told as a Music Hall romp, fascinating to watch but in the end leaving this audience member wondering what it all adds up to. It's a bleak picture where lust gives way to suicide, homesickness to betrayal, and patriotism to madness.

The three icons of Queen, Dictator and President are brilliantly impersonated by Shannon Holt, who makes you laugh as your blood runs cold.  Christian Leffler is dominating as a man robbed of his innocence and his beloved wife by an unnamed war, Dorie Barton portrays Mary the Virgin as a hot little number, while Daniel Bess is a virile Christ. Also notable are Dylan Kenin, Amanda Troop, Bill Brochtrup, Brittany Slattery, John Charles Meyer and John Prosky.

Set is by Frederica Nascimento, lighting by Michael Gend, music and sound by John Ballinger, and costumes by Raquel Barreto.

At Odyssey Theatre, 2055 S. Sepulveda Blvd., West LA through March 16.  Tickets: (310) 477-2055 or www.OdysseyTheatre.com.
Reviewed in the March issue of NOT BORN YESTERDAY.
Posted by THEATRE SPOKEN HERE by Morna Murphy Martell at 3:47 PM