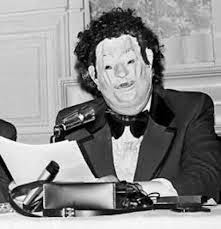 In 1972, at the American Psychiatric Association’s annual convention, Dr. John E. Fryer, wearing a mask and wig and using a voice-distorting microphone, declared “I am a homosexual. I am a psychiatrist.” to an audience that branded homosexuality a mental illness. In this play, playwright and psychiatrist Guy Fredrick Glass sensitively dramatizes a young psychiatrists struggle to come to grips with his own sexuality at a time when being openly gay would end his career. In light of our present awareness of gay rights, this production is a reminder of battles, internal and external, that had to be fought in this quest for human rights. 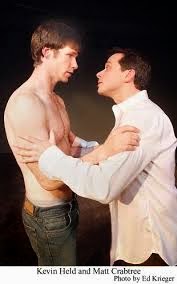 Matthew is in love with Jake, an activist who is boldly challenging the Saturday night ‘round-ups’ of homosexuals in homophobic Philadelphia in 1968. For what he deems professional reasons, Matthew hides behind a virtual mask and can only be himself with friends who are ‘out.’ However, when he is lured into aversion therapy by his psychiatric mentor he deludes himself that he is ‘cured’ which leads to tragedy and ultimately his salvation.

Under John Henry Davis’ unflinching direction the play illuminates, through the action and actual news footage, what dangerous challenges the Gay Pride movement faced from both government and ersatz science. 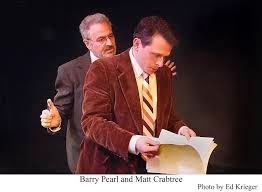 Matt Crabtree is excellent as Matthew; Barry Pearl is chilling as the straight doctor determined to ‘save’ him; Kevin Held is deeply moving as the gay rights activist who is his lover; Richard Sabine is hilarious yet poignant as a self-hating gay patient; Christopher Frontiero is delightful as an opera-loving friend, and Jonathan Torres is charming as a young gay activist.
Racquel Lehrman of Theatre Planners produces this Gap In The Wall world premiere production. Plaudits to Joel Daavid for set and lighting, to Christopher Moscatiello for sound, to Shannon Kennedy for costumes and to Troy Hauschild for awesome projections. 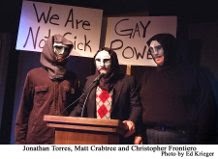